A recurring theme at Amana Hospital in Dar Es Salaam, Tanzania is the chronic lack of resources. There isn’t much healing and recovery going on in the medicine ward because there isn’t a lot of real medicine being practiced. Patients wallow away for days on end hoping to get better but they don’t because they can’t afford the tests and medicines they need. 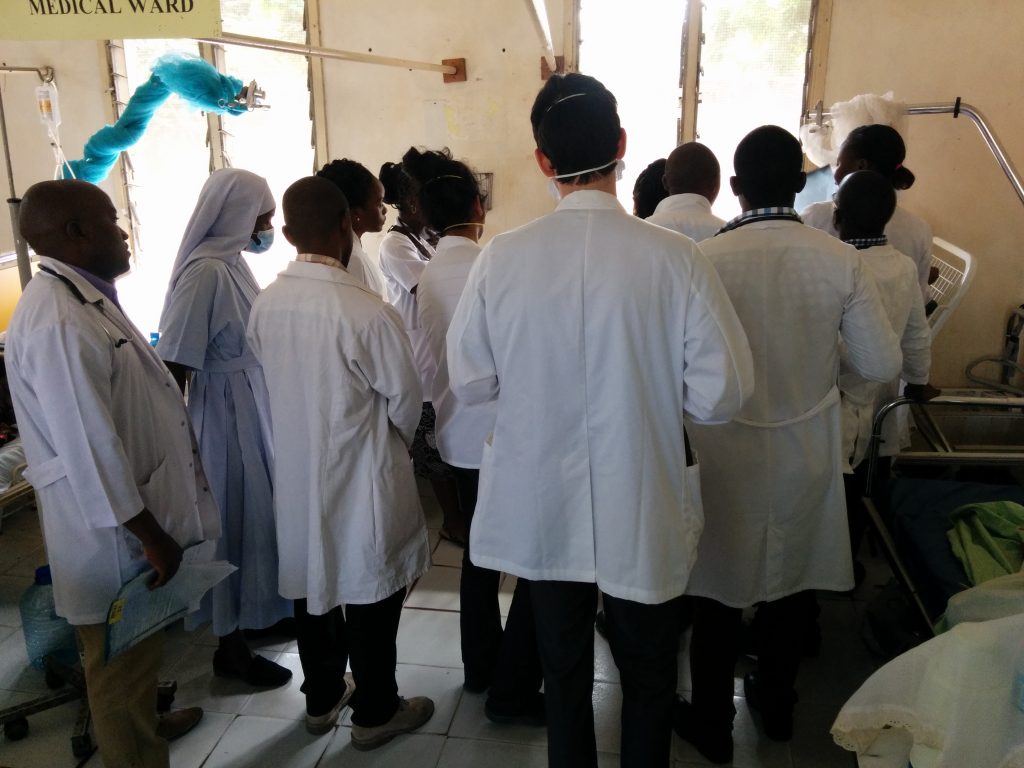 Monday morning, all the doctors in the medicine ward, from interns to the head of the department, gather to round on the patients in the ward. The doctor in charge of each patient would recite the patient’s chart – her chief complaint, medical history, results of physical exams and diagnostic tests, provisional diagnosis, and treatment plan.

Diagnoses tend to stay “provisional” for a long time, if not indefinitely, because the necessary confirmatory tests are seldom done. And even if an exact diagnosis was obtained, how would the patient pay for a lifetime of medications to treat a chronic condition?

This morning I saw Jennifer, a middle-aged woman suffering from (a provisional diagnosis of) congestive heart failure secondary to anemia and peptic ulcer disease. She complains of shortness of breath and vomiting of blood. Jennifer was admitted to hospital five days ago. Shortly after admission, the doctors ordered a chest X-ray, ECG, and renal function tests to try and determine the cause of her heart failure. She was also put on captopril, a drug that will dilate her blood vessels to reduce the workload on her heart, and Lasix, a diuretic drug that will reduce the amount of fluid in her body. Fluid accumulation in the lungs is one complication of congestive heart failure.

Today, Jennifer stopped her medications because of financial constraints. She hasn’t done any of the tests the doctors ordered for the same reason. Because of difficulty breathing, Jennifer hasn’t been able to lie down for several days. She breathes by extending her arms in front of her like a tripod – she’s recruiting muscles in her shoulders and chest to help with breathing, a sign of respiratory distress. I wonder if she’s been able to sleep at all. 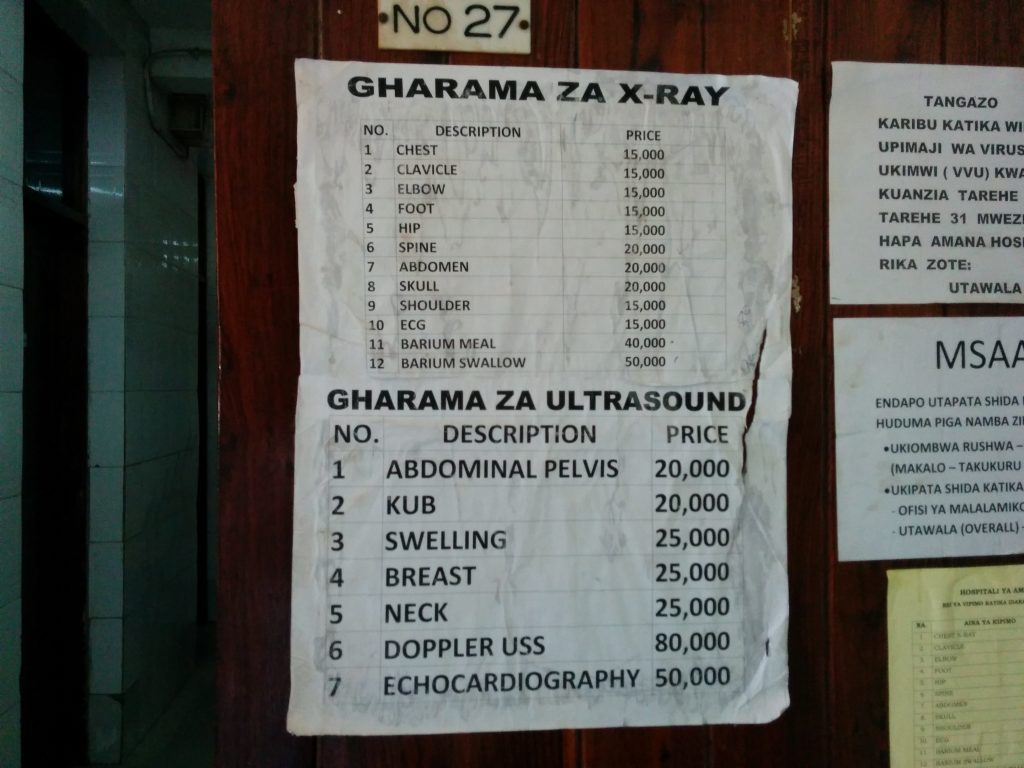 To do all the diagnostic tests the doctors ordered would cost 45,000 shillings – about US$21. But even if she could afford the tests, which would likely confirm that she has heart failure, she’ll still have to pay for heart failure drugs for the rest of her life. Being HIV-positive, she’s also susceptible to many other illnesses and complications that could be expensive to treat.

According to the doctors, Jennifer’s family is trying to scrape together some money in order to continue her medications and get the tests she needs. If they’ve already waited this long, I wonder if they’ll actually come through.

In the US and Canada, we seldom stop to consider what a patient’s life is worth and whether we should bother treating them. For the most part, patients and their families expect everything to be done to save their lives. We believe that every life is precious.

In Tanzania, life has a price. The government doesn’t have a bottomless barrel of money to pay for everyone’s care. Even the little it can afford to spend is often pilfered and squandered by corruption and graft. So families are on the hook to finance their loved ones’ treatment. 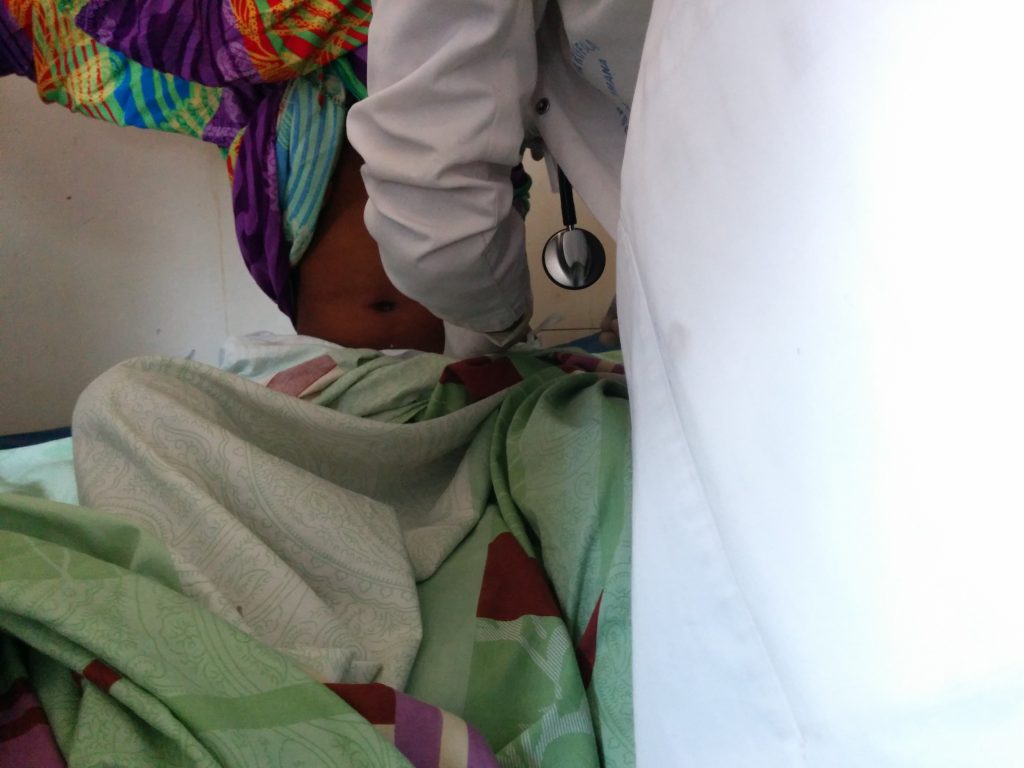 But they’re only willing and able to pay so much. They can fork over hundreds of thousands of shillings to save Aunt Jennifer’s life, or use the money to send their children to school. If someone isn’t valuable enough to their family or community, and they’re not independently wealthy, it’s fair to say they’ll die in the medicine ward.

Rounding on these patients is almost more about documenting the course of illness rather than treating it. We know the patient isn’t going to get any tests or treatment because they can’t afford it. We’re watching people slowly die before us. 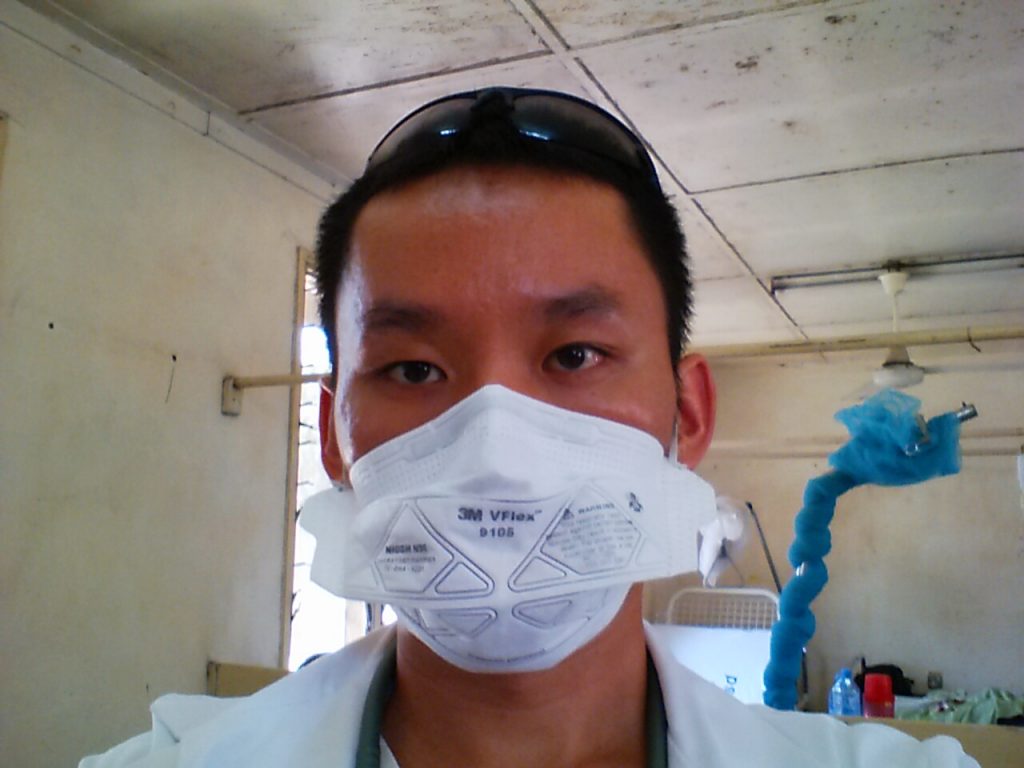 Yours truly wearing an N95 mask in the Medicine Ward

In Canada, we’re taught that patients should receive blood transfusions when their hemoglobin concentration falls below 7.0 g/dL (70 g/L). A normal range for hemoglobin is 12.0 to 17.5 g/dL, depending on gender.

But at Amana Hospital, patients are routinely allowed to fall below 4.0 g/dL. Even then, they receive at most two units of blood, which is enough to raise hemoglobin by 1.0-1.5 g/dL.

Many of the patients in the medicine ward are anemic, with hemoglobin as low as 2 g/dL. As a result they’re fatigued, short of breath and even going into heart failure. But these patients aren’t receiving even basic fluids to increase their circulating volume, like intravenous saline, which is dirt cheap even by Tanzanian standards. I don’t understand why I saw so little fluid resuscitation happening in the ward – the reason, I’m told, is that the patients are capable of drinking, yet few had bottles of water beside them.

At some point, patients are mentally dulled by their anemia and illnesses and may lose the desire to drink, but that doesn’t mean they don’t need fluids. On top of that, the ambient temperature in the non-air-conditioned ward approaches 30°C (86°F) during the day. It’s no wonder they feel like shit. 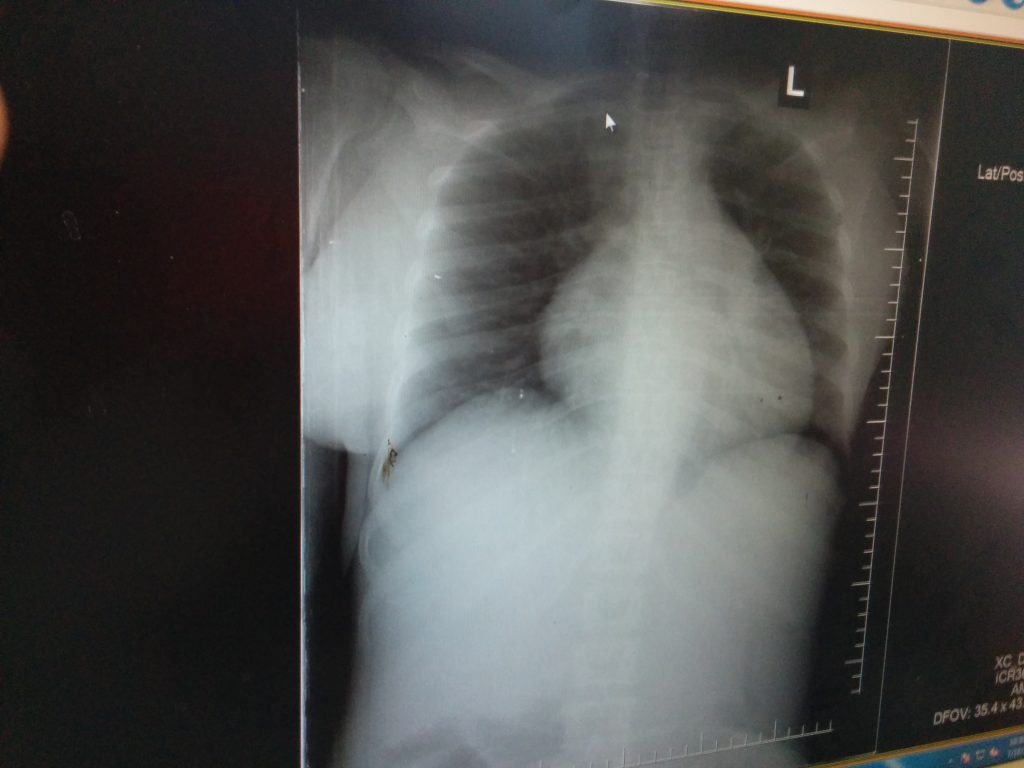 An X-ray shows cardiomegaly (an enlarged heart) in a patient with severe anemia. The heart enlargement could be the result of the increase work of pumping sufficient blood with so little circulating hemoglobin

Should I sponsor a patient with GoFundMe?

Some people have suggested that I raise money for patients like Martha and Jennifer in order to get them the tests and treatment needed to save their lives. I’ve seriously considered the idea and still haven’t come to a conclusion whether it’s the right thing to do.

The first issue is the logistics of paying for their treatment. Patients at Amana Hospital pay for treatment electronically using debit cards they load up when they’re admitted. I’d have to take the patient’s debit card, wait in the long admission line, and load their card for them.

Second, I need to make sure that they actually get the tests and treatments that are ordered by sitting at their bedside and verifying everything that’s administered. Corruption and graft are chronic problems in Tanzania. A patient could pay for medications and never receive it, or be given a placebo in its place. The real medicine could then be stolen by an unscrupulous healthcare worker and resold.

I also don’t know this patient’s true wishes. Does she want me to intervene? Does her family want me to? What would the other patients and doctors in the ward think about me singling out one particular patient for intervention?

Assuming I had the patient’s consent, I could spend all day supervising the care of just that one patient – spending money wisely is a full time job in this country. I have no issue with doing that. But the bigger problem is what happens down the road. Most patients in the ward have HIV and other chronic diseases. Even if they can recover well enough to return home during the few remaining days that I’m at the hospital, they need significant funds to buy the medications they need for long-term treatment.

They’re also liable to fall ill again in the future, and I won’t be there to help them. If they’re going to die anyways, if their own relatives are unwilling or unable to help them, I could simply be prolonging their suffering.

I’m strongly considering “adopting” a patient while I’m here if I can make a difference. But it’s not an easy task, and results are far from guaranteed.