Many surgeries in Tanzania are performed with no CT scans or MRIs done beforehand. A surgeon could open someone’s abdomen only to find a completely different problem than what was originally suspected. That’s why imaging technology is so helpful. Amana Hospital has no CT scanners or MRI machines.

Today, Dane and I went to the surgery clinic where Dr. Eric, a general surgeon, was doing consultations for patients who were both pre- and post-surgery.

We saw several cases of inguinal hernias in middle and old-aged men, both pre- and post-operative. In men, inguinal hernias are usually “indirect” hernias, where a loop of bowel protrudes into spermatic cord in the scrotum, causing a visible protrusion in the groin. When hernias cause symptoms, such as pain when coughing or exerting, they can be repaired through surgery. Some hernias are “reducible” – the bowel can be pushed back into the abdomen with bare fingers.

Dr. Eric generally repairs hernias using the “Lichtenstein” technique, whereby a polymer mesh is placed over the weakness in the abdominal wall where the hernia originated. 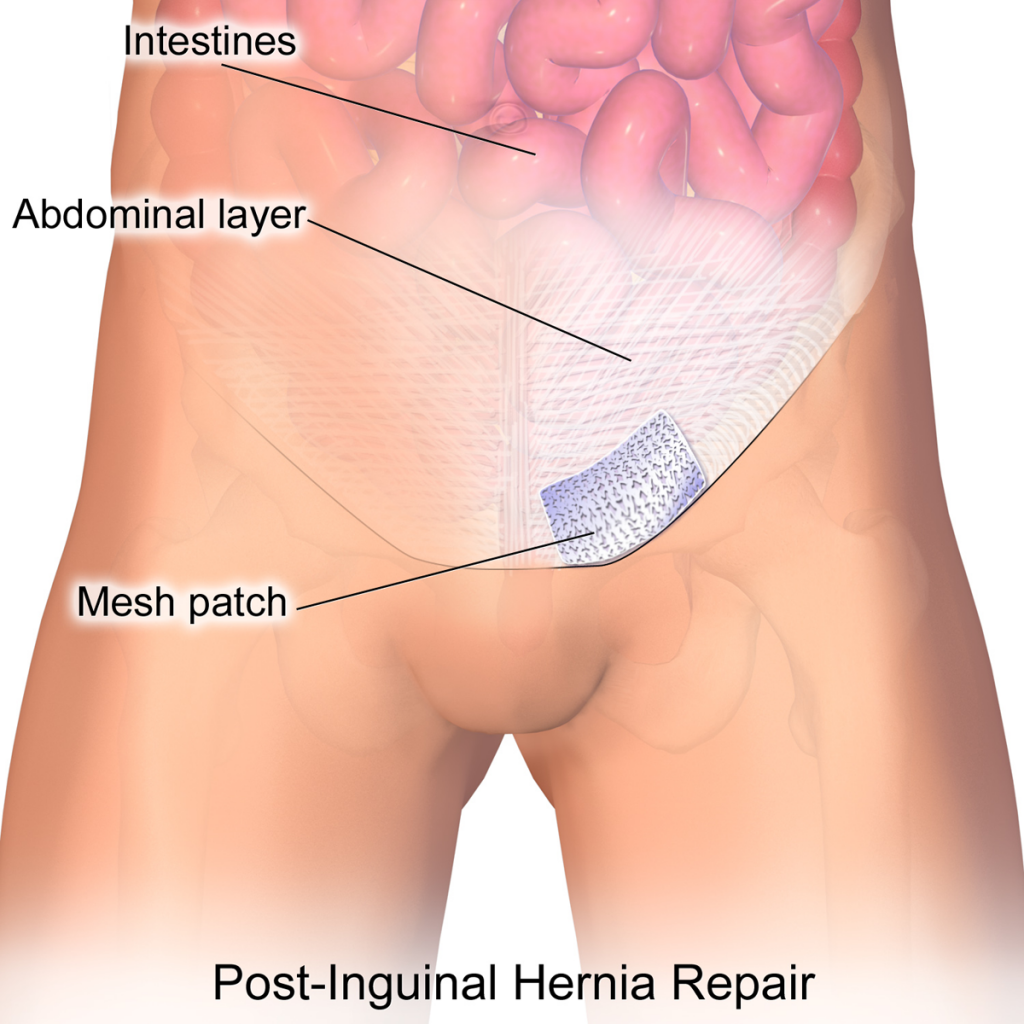 An inguinal hernia repaired with mesh, courtesy of Wikipedia

A defining feature of a thyroglossal cyst is that it moves when the patient sticks their tongue out, reflecting its connection to the thyroid’s original location at the base of the tongue.

Our patient told us his cyst appeared in the last month and causes him a lot of discomfort. Dr. Eric scheduled him for surgery next week.

Bladder cancer caused by a parasite

A 58-year-old farmer from a remote part of Tanzania came to the clinic accompanied by his son who lives in Dar Es Salaam. The farmer recently noticed blood in his urine. He previously had schistosomiasis, a disease caused by parasitic flatworms that is common in developing countries, especially in children, farmers and others who come into contact with contaminated water. 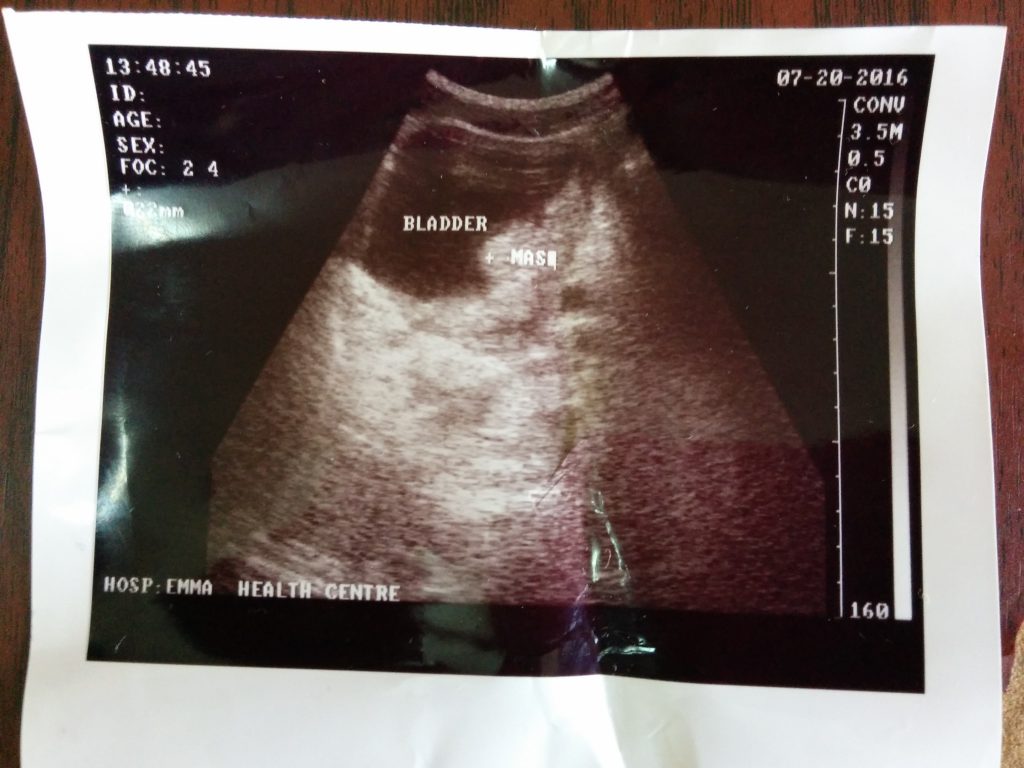 Appendicitis and an supra-umbilical hernia

A female patient came in with a distended abdomen while standing. When we had her laid down for an abdominal exam, the distension was gone. Dane did a textbook-quality abdominal exam on the woman, with Dr. Eric translating Dane’s instructions into Swahili for the patient. 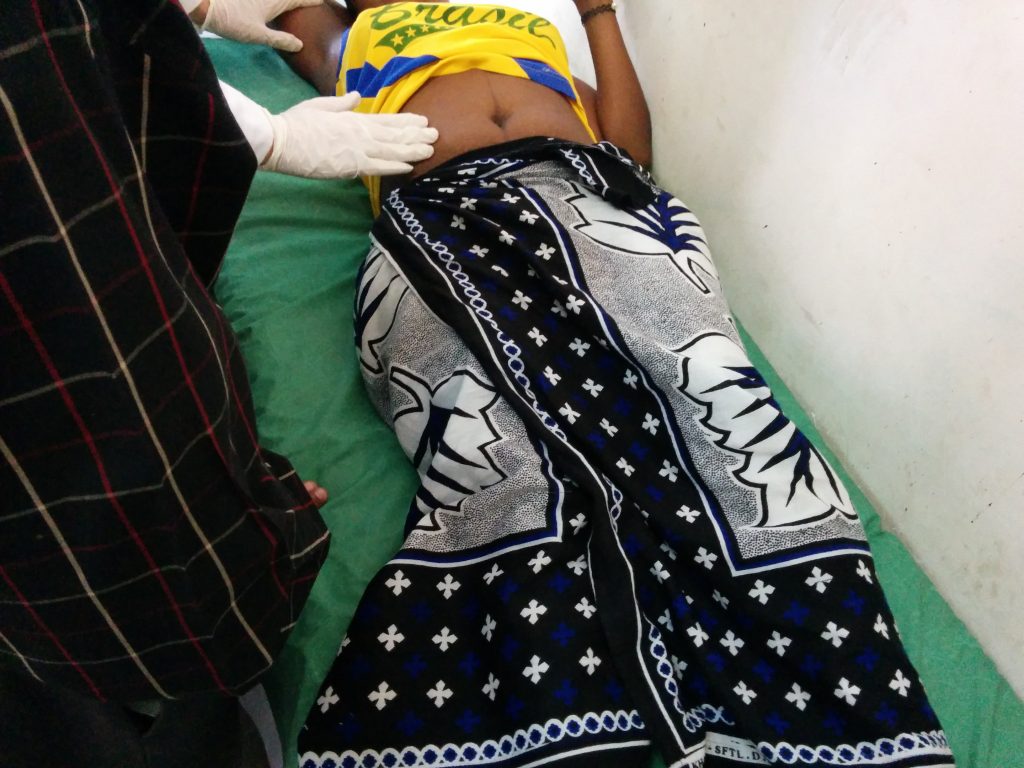 What we didn’t know is that the cause of this patient’s abdominal distension was a supra-umbilical hernia. When standing up, the patient’s bowels protrude from her abdominal wall, causing distension. When she lies down, the distension disappears because the bowel slides back into her abdominal wall. Hernias of this type can happen in women who’ve had multiple pregnancies or are obese. Our was scheduled for surgery.

Surgery on a pregnant woman with appendicitis… we think

When Dr. Eric’s clinic was over at noon, he invited us to join in the operating room to watch him perform an appendectomy on a woman who was 30 weeks pregnant. We felt over the moon about the invitation. 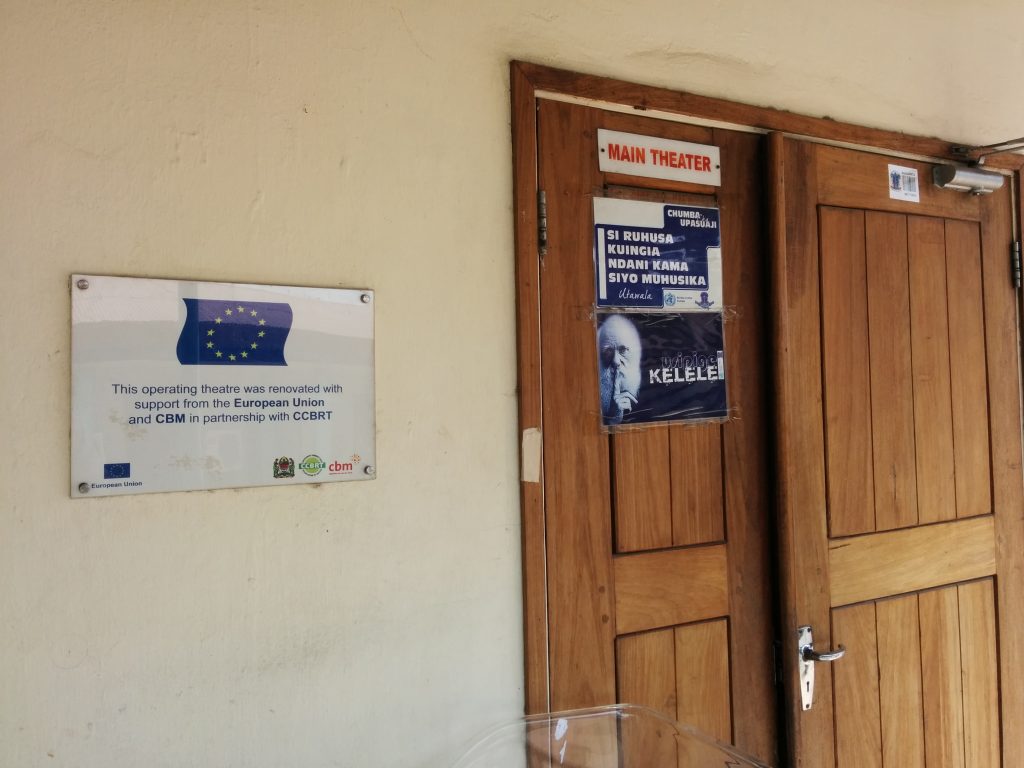 We followed Dr. Eric and his patient into the operating theater. The patient previously had an ultrasound which, according to whoever did the ultrasound, showed that the patient had appendicitis.

Because the patient was pregnant, she received epidural anesthesia instead of general anesthesia. Anesthetic drugs are injected into space around the spinal cord, causing temporary loss of sensation in that part of the spinal cord and all areas below it. It took several attempts to get a needle into the patient’s epidural space, and she was in excruciating pain during the process. 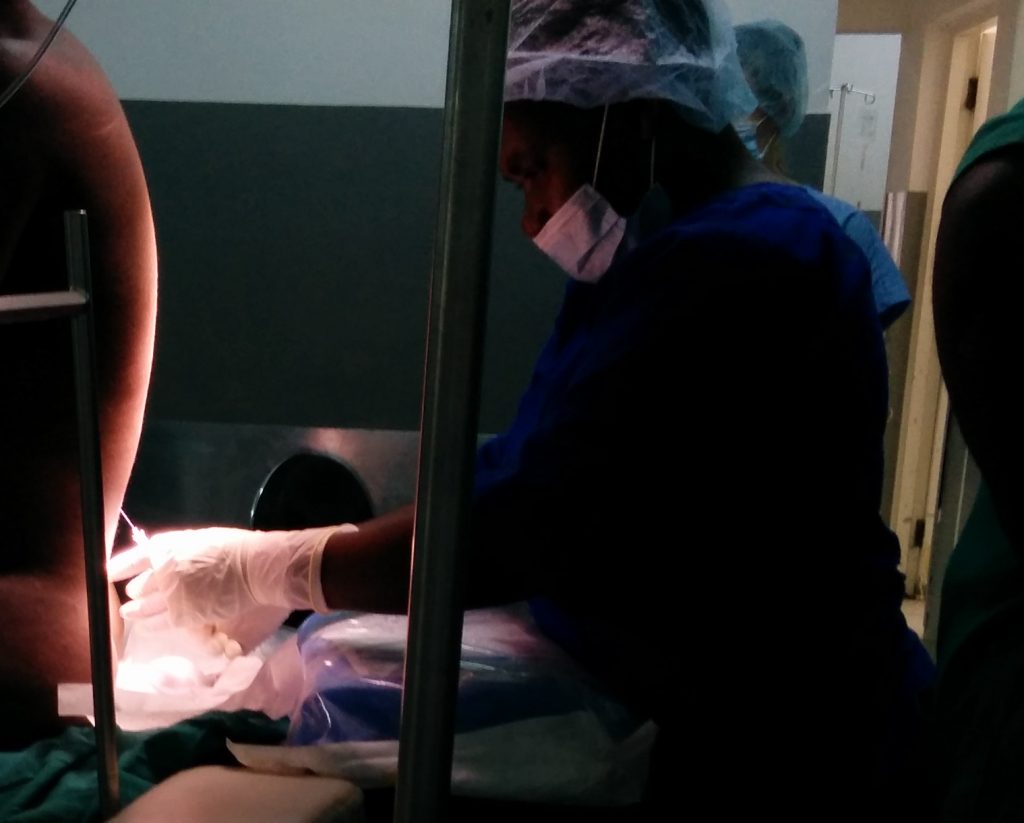 Once the anesthesia had set in, the operation began. But instead of cutting in the right quadrant, Dr. Eric made an incision down the middle of the patient’s abdomen. Apparently he didn’t quite trust the results of the ultrasound, which are often wrong – many women with suspected appendicitis actually turn out to have ovarian cysts, according to Dr. Eric. By making an incision in the middle of the abdomen, he could also check for ovarian cysts.

This generally isn’t a problem in the developed world where most people get a CT scan before surgery, mapping out exactly where the problem is. Appendectomies are also generally done laparoscopically (with cables inserted into the abdomen through small incisions), rather than as open surgeries. 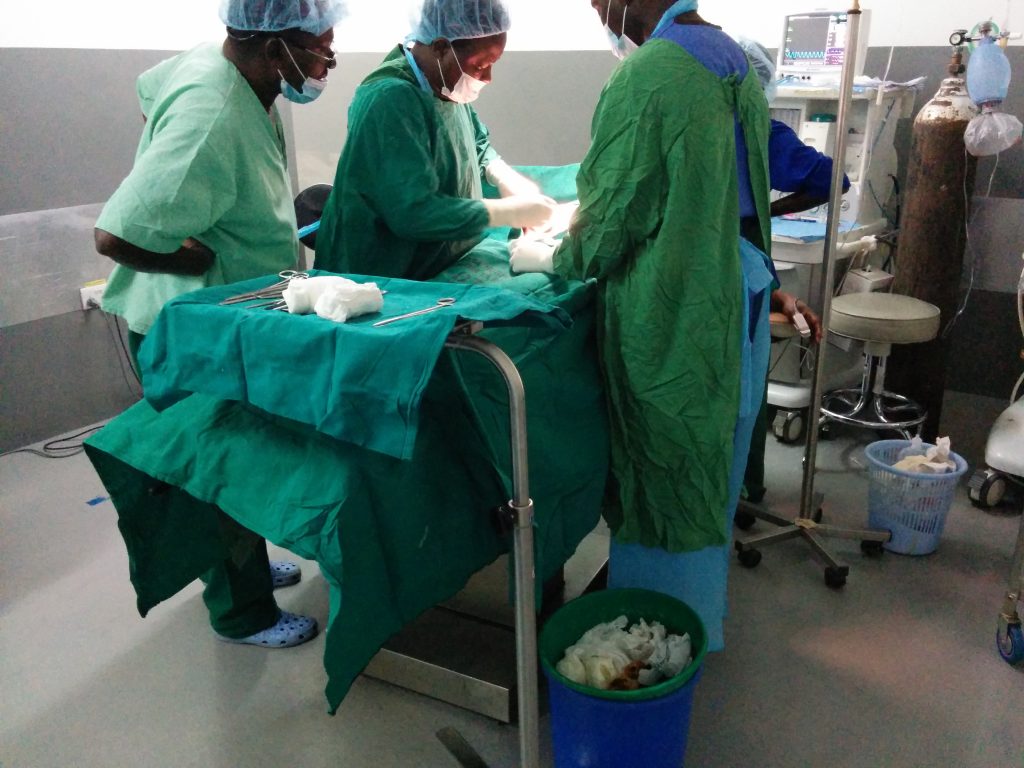 After opening the patient’s abdomen, Dr. Eric discovered that her appendix looked normal. Instead, he discovered that she had an ovarian cyst that had caused her ovary to twist, causing a painful ovarian torsion. The cyst was cut and the patient sewn back up. The entire operation took about 30 minutes. 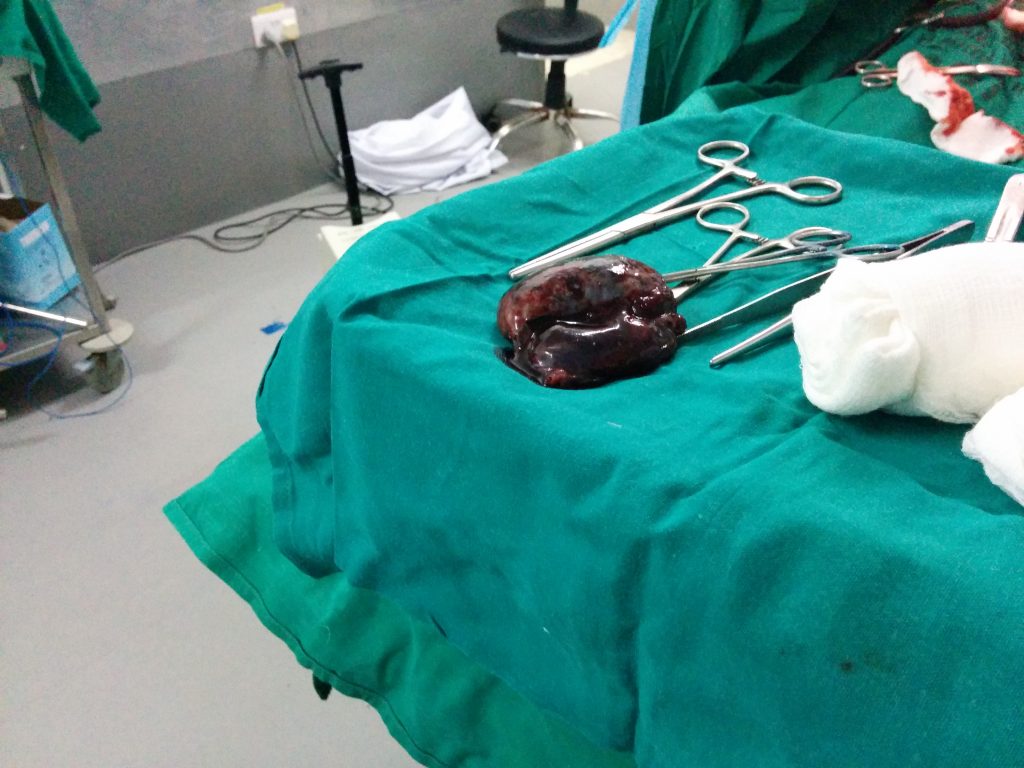 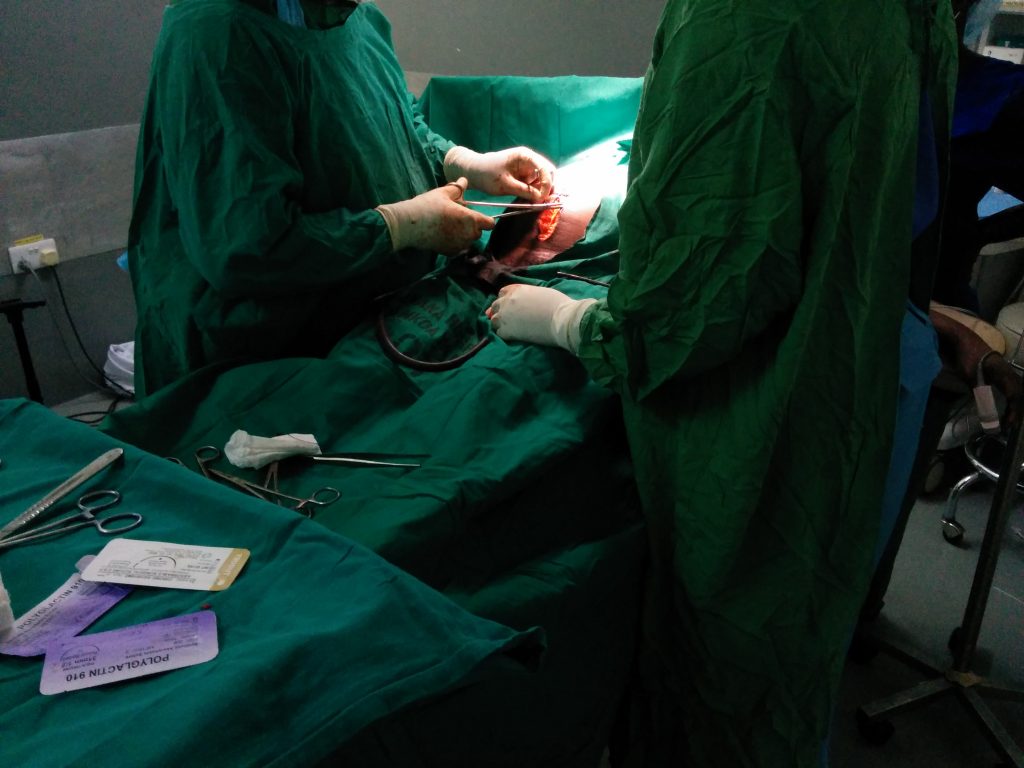 Is the surgical field really sterile?

The nurse in charge of the operating theater made a really big deal that we had to be properly dressed for the surgery. I had to wear a plastic gown that covered my entire upper body and most of my legs, except for about eight inches of my shins. She told me that it was unacceptable for my street pants to be visible from under the gown, so I had to change into green surgical scrub pants.

But when I got into the operating theater, I noticed that there were several flies circulating in the room – I even saw one land on the surgical instruments. The doctors and nurses in the theater also didn’t cover their noses with their surgical masks – which is a potential source of infection for the patient.

On the surface, everyone seemed to pay heed to proper surgical sterile technique. But between the flies and the uncovered noses, I wonder if it was all for nothing.