After three weeks rotating through government hospitals in Dar Es Salaam, we got to work with a distinguished physician at the TMJ Hospital today. I say distinguished because Dr. Kapiteni, the head doctor at TMJ Hospital, is apparently quite well known in Dar – our taxi driver knew his working hours off the top of his head. A graduate of Harvard and a native of the Congo, Dr. Kapiteni moved back to Tanzania from the United States with his homesick Tanzanian wife. A quick search in Google reveals that he’s the personal physician of some high ranking Tanzanians. 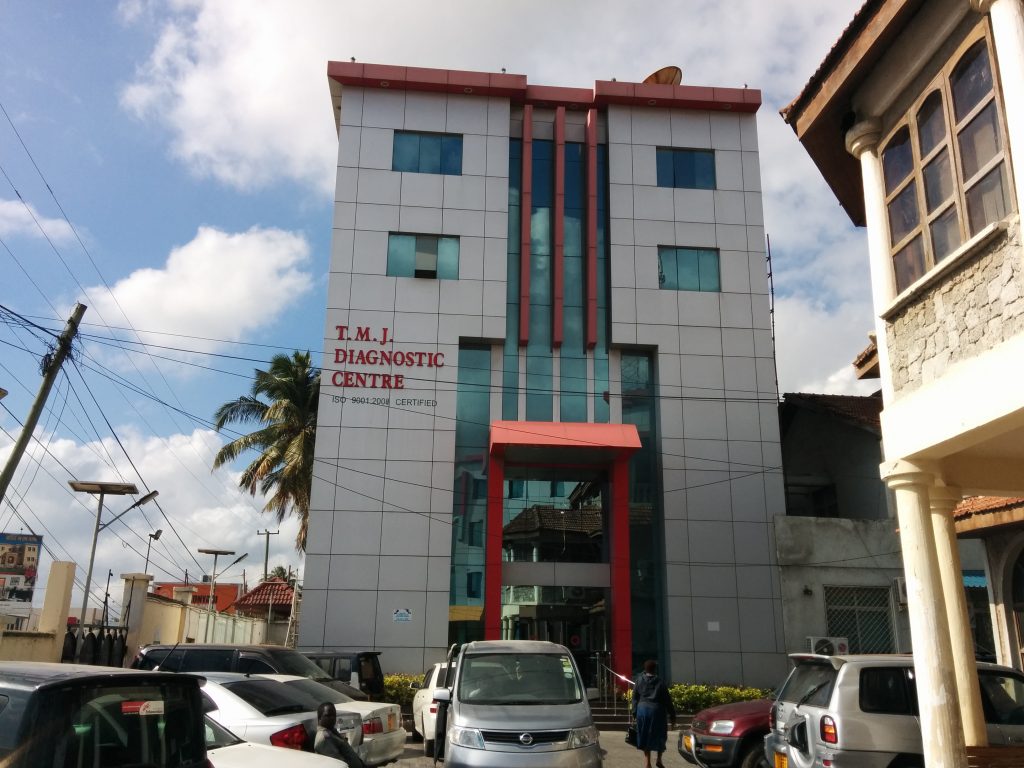 TMJ Hospital is a complex of three buildings in a suburban part of Dar Es Salaam. It’s much better funded than the government hospitals we’d seen. For one, they have CT scanners and MRI machines, and this is one place you might go if you want the best possible treatment in Tanzania and money is no object. 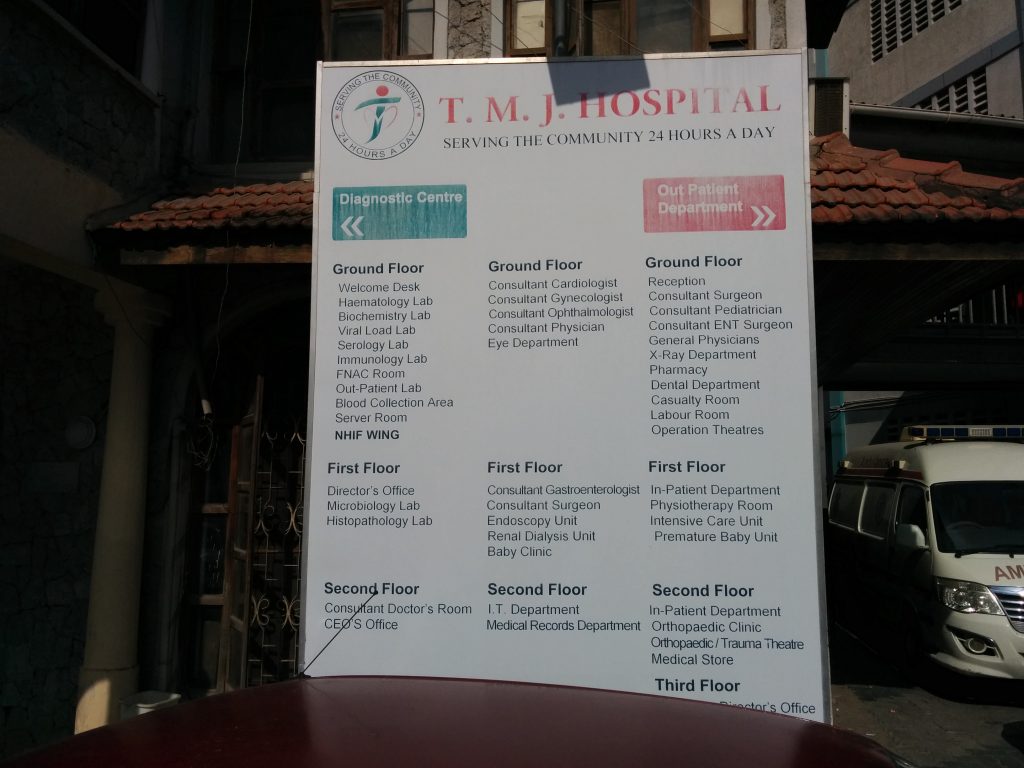 Most rooms in the medicine ward at TMJ are private, although due to being required to accept NHIF (National Health Insurance Fund), a public insurance scheme that covers an increasing number of Tanzanians but doesn’t pay for private rooms, they’ve converted some rooms to multiple beds.

My biggest disappointment was that despite being a private hospital, most of the wards weren’t air-conditioned (save for the really fancy private rooms), and on a hot, muggy day in Dar Es Salaam, it was pretty unpleasant to be sweating in dress pants and a white coat.

The economist in me thinks that it would be fascinating to study the implementation of the NHIF – Dr. Kapiteni said that before NHIF, most patients paid cash. But as NHIF grew and subsumed many private insurers, they gradually cut reimbursements to the hospital so that care is now compromised due to cost pressures. Patients still have to pay cash for treatments that aren’t covered by NHIF, but overall it sounds like the hospital is financially in a more difficult position since its implementation. 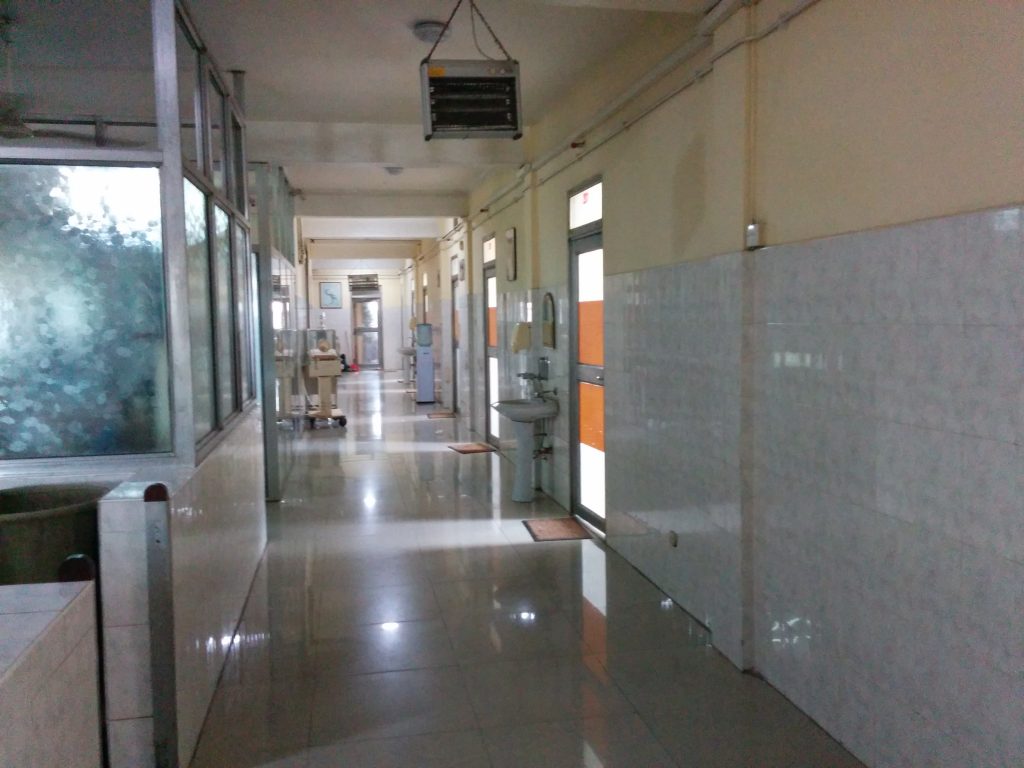 As an example, the NHIF covers one MRI per patient every three months – but some patients undergoing treatment require more frequent MRIs to monitor their progress, so they have to pay out of pocket. 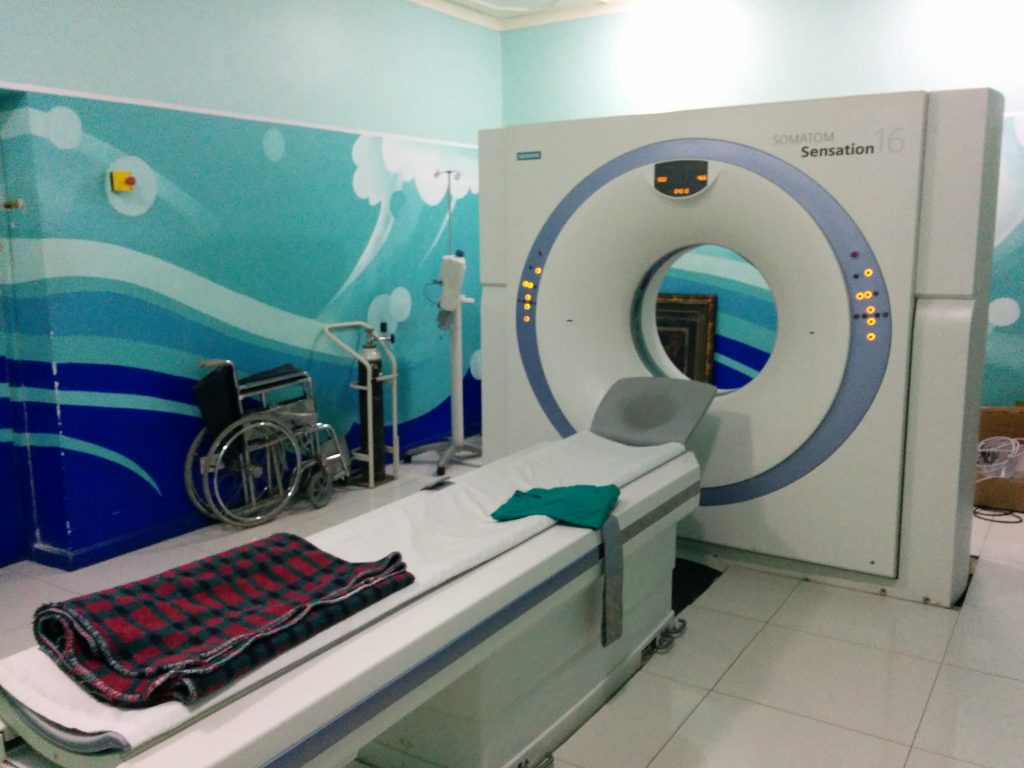 We told Dr. Kapiteni we wanted to see cases that we wouldn’t otherwise see in the US or Canada. That would be no problem, was the reply.

Our first case was a retired, well-to-do woman who came to the hospital over a week ago with a history of headache, vomiting, loss of consciousness and right-sided weakness. She had no previous admissions to hospital but did complain of on-and-off memory loss. On exam, she was disoriented and had reduced reflexes. She tested positive for HIV and was thought to be suffering from advanced stage AIDS-related-complex with central nervous system manifestations.

Her differential diagnosis included toxoplasmosis, cryptococcal meningitis, and neurocysticercosis. I’d never heard of the latter (and still can’t pronounce it properly) but now I’ll never forget it. Meningitis was ruled out because a lumbar puncture showed that her spinal fluid was normal. But then they did an MRI of her brain, which revealed ring-enhancing lesions – when given contrast dye, bright rings appear at the edge of the lesions. 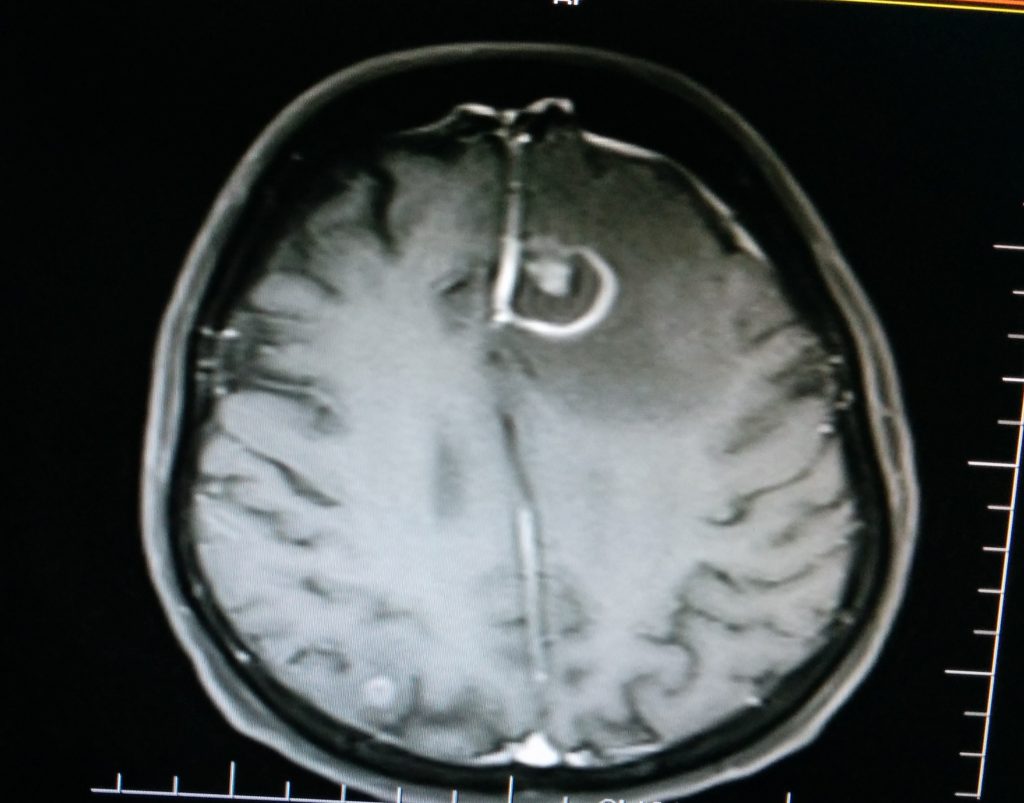 Neurocysticercosis is a disease caused by infection with Taenia solium, a parasitic tapeworm found in pigs. Eating under-cooked pork is one of the main causes of infection, and even people without HIV can get it. Thus, what was first thought to be a manifestation of AIDS in this patient turned out to be a parasitic infection. Neurocysticercosis is most common in places where hygiene is poor and people live in close contact with pigs. Although I don’t eat pork, learning about this woman’s case made me question my habit of eating food from street-side barbecues in Tanzania.

Another notable case we saw was a man with end-stage liver cancer, which has metastasized to other organs, with severe ascites – accumulation of fluid in his abdomen causing swelling. He was referred to TMJ from Amana Hospital, where we’d spent the last two weeks. 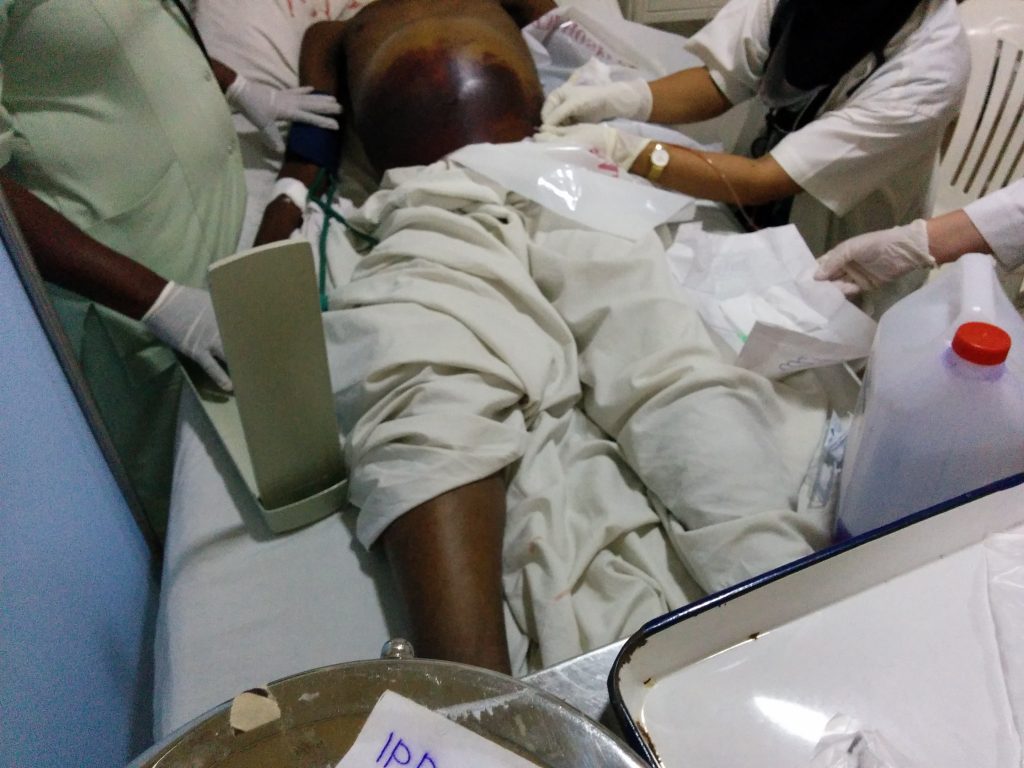 Draining the abdomen of a patient with end-stage liver cancer

How did he get liver cancer at such a young age? In Africa, many people get infected with hepatitis B from their mothers – known as “vertical transmission.” After many years of hepatitis B infection, livers can fail, and they’re susceptible to hepatocellular carcinoma – liver cancer. At this stage, there aren’t many treatment options for the man, except to drain his abdomen to provide some pain relief and make it easier to breathe. It’s likely he won’t see the light of day again. 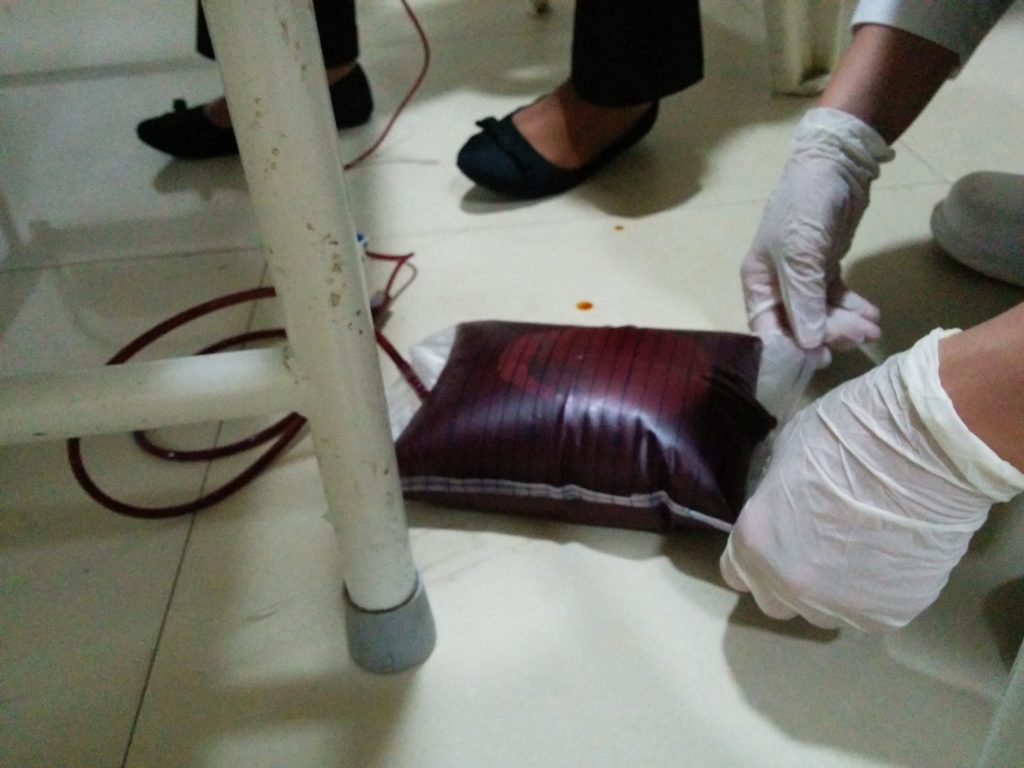 Two liters of bloody fluid (a sign of hepatocellular carcinoma) were drained from the man’s abdomen. The procedure will likely have to be repeated the next day, as liver failure causes fluid to accumulate in the abdomen.

It broke my heart to see this man, who is younger than me, in so much pain. Deaths like his could be prevented by preventing mothers from transmitting hepatitis B infection to their babies. To do so would require screening pregnant women and giving their newborns hepatitis B antibodies and the hepatitis B vaccine. But a country like Tanzania can’t pull off such an expensive project without foreign aid, which so far is mainly directed at HIV and tuberculosis.

We ended the day with a tour of the dialysis unit at TMJ. One complication of malaria, a common parasitic disease spread by mosquitoes, is renal failure. Many patients die as a result. By dialyzing patients (hooking them up to machines a few times a week to clean their blood), Dr. Kapiteni is keeping many patients alive and functioning while they wait to get kidney transplants. 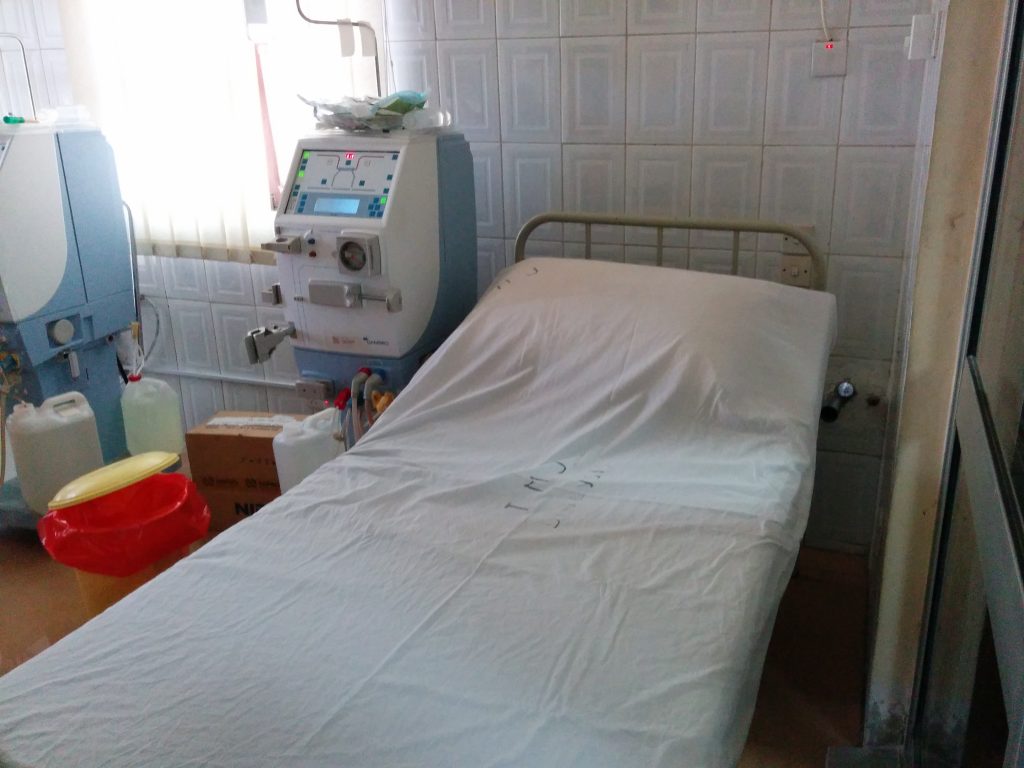 I was thoroughly impressed by TMJ hospital, although I wish they would keep their wards cooler. It’s given me hope for the future of healthcare in Tanzania – if only everyone could have access to care like this. Unfortunately, it’s the exception rather than the rule.