Since coming to Tanzania I’ve written a lot about death – there’s plenty of it in this country, as there is everywhere else, but for reasons I’m not used to. People are seemingly dying needlessly. But maybe it’s my perception that’s the problem.

Yesterday I wrote about a young man around my age at the TMJ Hospital with liver cancer as a result of long-term infection with Hepatitis B. By the time he’d arrived at TMJ, his cancer had metastasized to other organs and his days were numbered. As it turns out, he died within 12 hours of us seeing him. 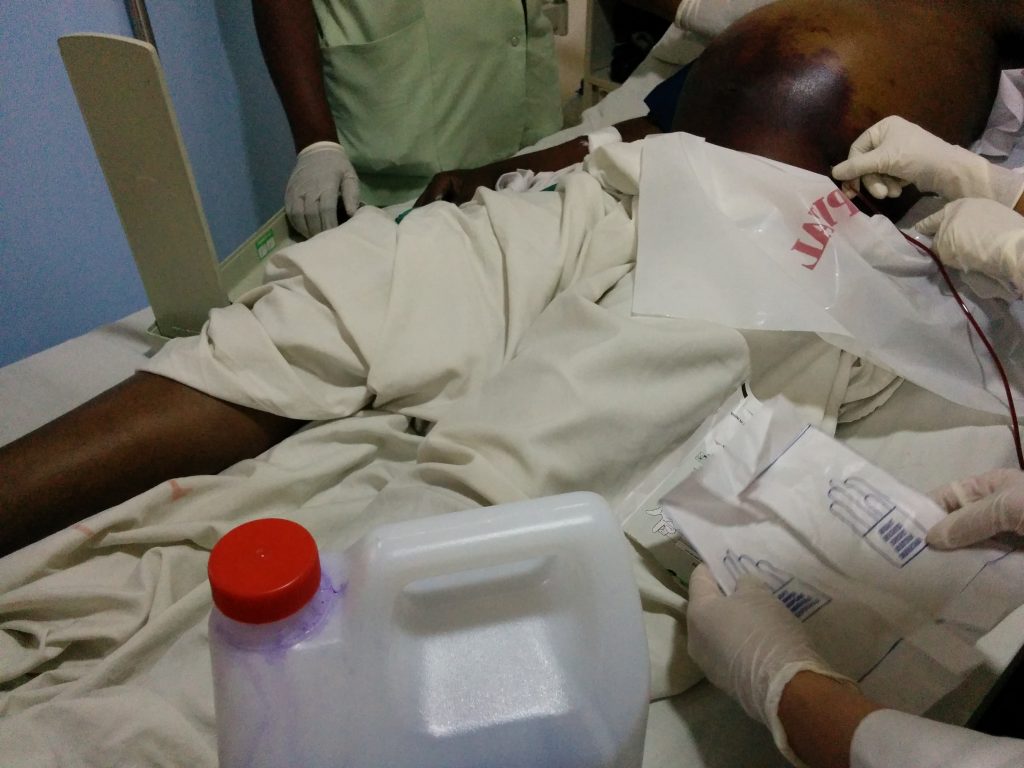 A patient with liver cancer due to long-term Hepatitis B infection gets his abdomen drained. He died about 12 hours after we saw him.

I was really distressed when I learned of his death, but at the same time he’s been relieved of his horrible suffering. The doctor on call mentioned that he was howling loudly for about four hours before his death.

Today we were posted with Dr. Priyank in the nephrology department at Muhimbili National Hospital, Tanzania’s biggest hospital with over 7,000 doctors. It occupies a massive campus not far from the center of Dar Es Salaam. 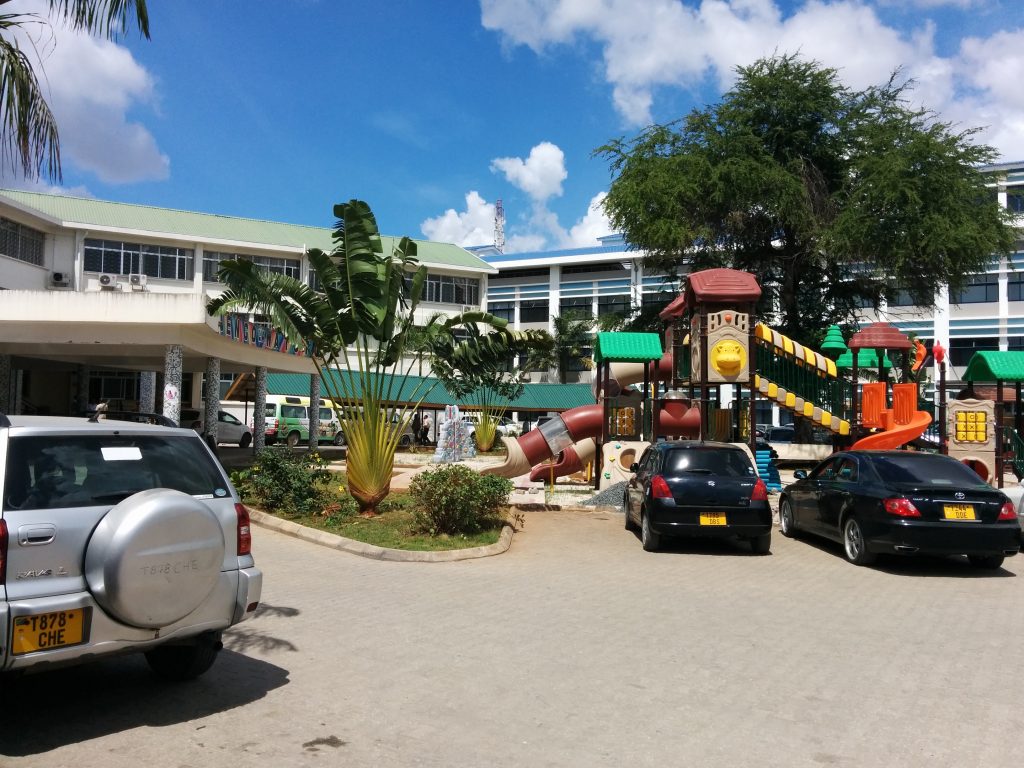 Muhimbili National Hospital – one of its many facades 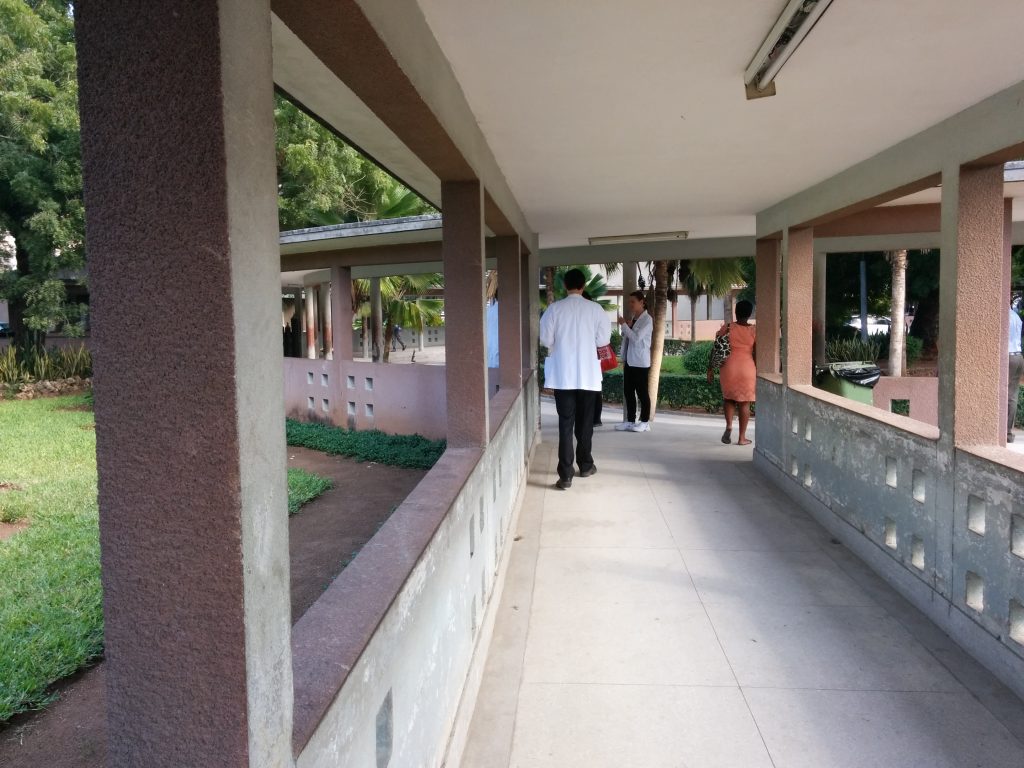 Muhimbili offers the gold standard of health care in Tanzania. If it can’t be done here, it probably can’t be done anywhere else in the country. For the most discerning patients with big wallets, even Muhimbili may not be satisfactory. For one, they don’t do kidney transplants – instead, patients are sent to India, along with their donors in the case of a live donor transplant.

But they do have one of the few dialysis units in the country. Dialysis, or the artificial filtering of wastes from blood, is a life-saving treatment for people with kidney failure. Although it only replaces about 5% of normal kidney function, that’s enough to prevent death. Depending on the cause and type of kidney injury, some people will eventually regain full kidney function – for them, dialysis is a stepping stone to recovery. Others have permanent loss of kidney function and dialysis is a bridge leading to a kidney transplant (hopefully).

Dialysis isn’t a nice lifestyle, as it requires patients to go the hospital three times a week and be hooked up to a dialysis machine for four hours at a stretch. Their blood is then pumped through a machine that filters waste about as fast as paint dries. The nurses constantly have to inject heparin, an anti-clotting drug, into the lines to make sure their blood doesn’t clot.

If anything, watching people get dialysis has made me appreciate my kidneys. I mean, it takes a machine the size of a smaller refrigerator to replace the function of two little kidneys that together are about the size of a baseball.

People on dialysis longer term usually get a “fistula” put in their forearm, whereby a surgeon creates a connection between an artery and a vein. The fistula, which becomes dilated from the blood pressure, provides easy access for dialysis lines. But it takes several weeks for a fistula to mature after surgery – in the meantime, patients who need dialysis will get it through the the internal jugular vein in their neck. Just the thought of having large needles and tubes coming out of my neck makes me squeamish. 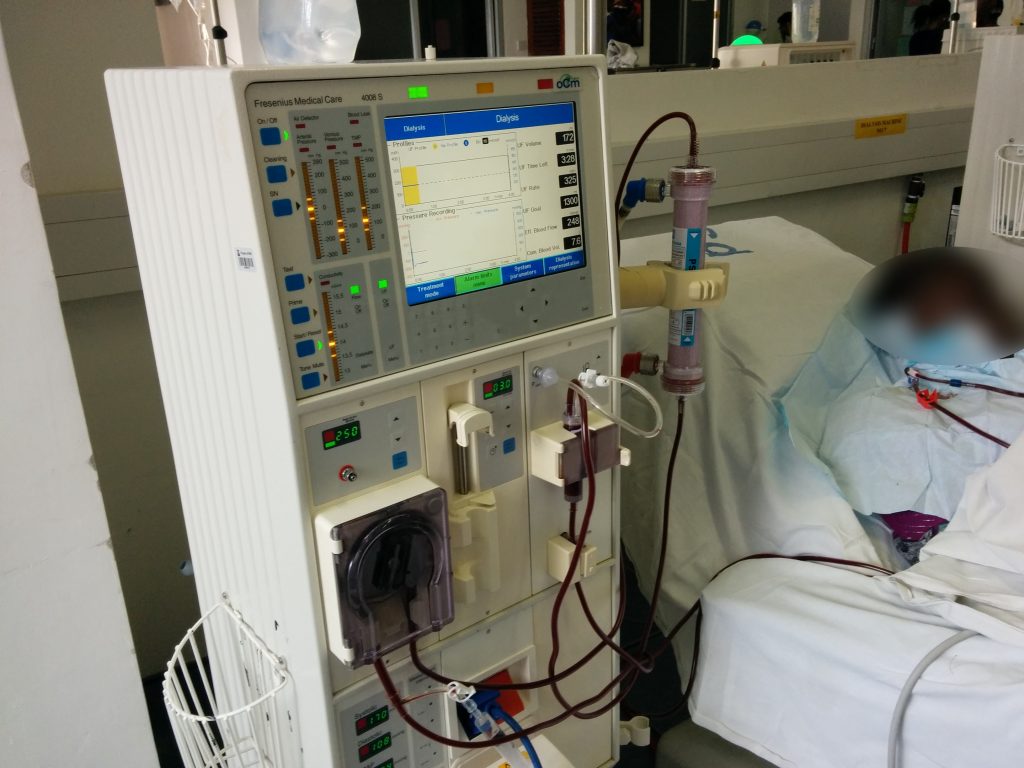 Some patients stick with jugular vein dialysis indefinitely because they can’t afford to get a fistula, or can’t afford to get a new line put in. Although the NHIF (National Health Insurance Fund) covers dialysis treatments, it doesn’t pay for fistulas or new lines. Patients are supposed to get their dialysis lines changed every three months to prevent infection, but at $120 a pop, not all patients can afford it.

One dialysis session at Muhimbili costs 300,000 shillings (~US$140) – one year of dialysis thus costs almost US$22,000, which is less than half of what it would cost in Canada, and about a third of the US price. Not many patients can afford that out of pocket, but many come with insurance. Those who don’t have insurance will get a reduced rate based on their finances, but they’ll only receive dialysis twice a week, if there’s room in the dialysis unit. I suppose that’s better than nothing.

As far as I can tell, the NHIF covers most government workers and their families, and people who work in the formal private sector, who pay premiums off every paycheck (along with an employer contribution). But Tanzania has a large informal economy, in part due to high taxes and heavy burden of red tape, and most of its people work on farms, and thus have no insurance.

Muhimbili has 17 dialysis machines, each providing three dialysis sessions a day – about 51 people a day can get dialysis at Muhimbili. People with HIV or hepatitis can’t get dialysis at Muhimbili because of the risk of infecting other patients. I’m told they’re planning to expand to 42 dialysis machines by the end of the year, and they’ll have dedicated machines for people with HIV and hepatitis. Even then, I doubt that 42 machines cover even a fraction of the demand from the over 4 million people who live in Dar Es Salaam, as Muhimbili is the only government hospital in the city that offers dialysis. And if people in Dar Es Salaam can’t get dialysis, I wonder about the 46 million Tanzanians who live elsewhere.

After touring the dialysis unit we went upstairs to see patients in the inpatient nephrology ward. 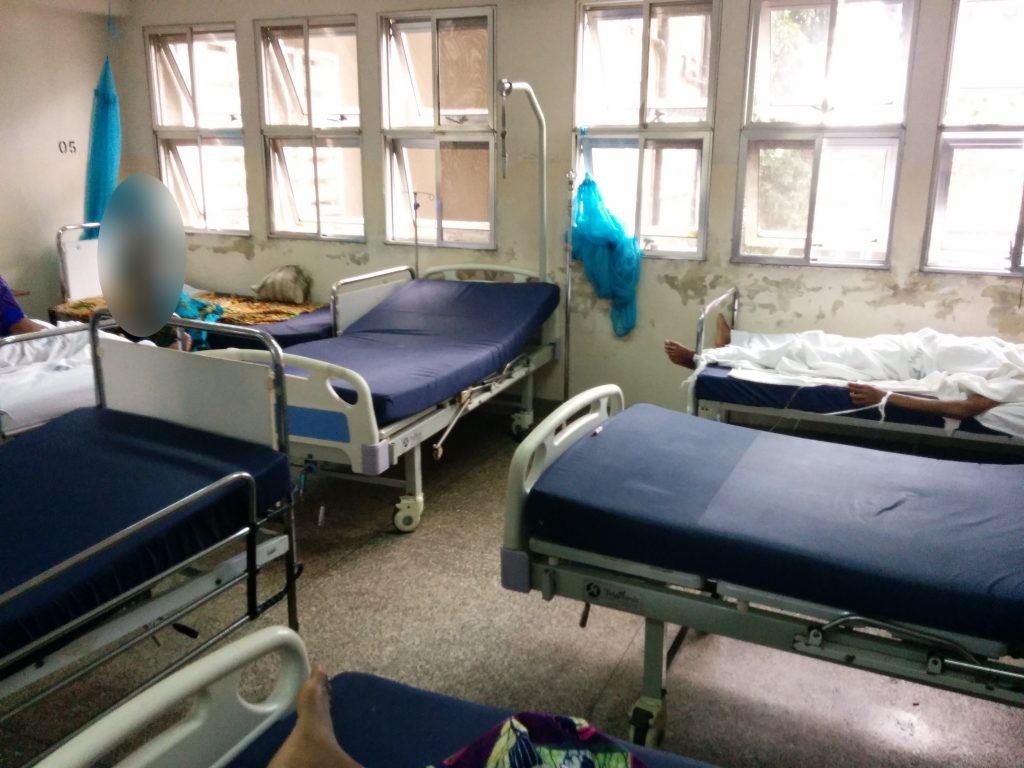 Nephrology Inpatient Ward (not air-conditioned), Muhimbili National Hospital. There are a lot of beds in the ward but if you have money or insurance you can upgrade to a private room.

One patient, a schoolteacher, was suffering from nephrotic syndrome, whereby the filtering capsules in the kidney get damaged, causing proteins to leak into the urine en masse. Normally the kidney’s job is to prevent us from peeing out our protein, but not in nephrotic syndrome.

Losing protein this way is problematic – for one, it causes the blood to become more dilute and lose its oncotic pressure – fluid then leaks from the blood vessels into tissues, causing swelling in the legs, abdomen and around the heart. Eyes get puffy, and lungs are filled with fluid. Proteins are also needed for our immune system to function properly, so people with nephrotic syndrome are more prone to infections.

The only way to treat this woman’s nephrotic syndrome is to figure out the underlying cause – many different things, from autoimmune diseases to cancer to drugs, can cause kidney damage leading to nephrotic syndrome, and the best way of figuring it out is to do a kidney biopsy. But Muhimbili currently doesn’t have the ability to do a biopsy, having run out of the necessary supplies. They don’t know when they’ll get the supplies – it could be days or weeks.

In the meantime, this patient has been paying for intravenous albumin, to replace the protein she’s losing in her urine. Each infusion of albumin costs almost US$300, and she’s already paid US$2,000 out of pocket for seven albumin infusions. Her nephrotic syndrome was resistant to treatment with steroids and angiotensin receptor blockers, two inexpensive drugs that are effective in some of the most common causes of nephrotic syndrome. To treat her any further, they’d first need to do a biopsy and get to the real cause of her disease. I hope she survives and recovers.

Even at Muhimbili, which has some of the brightest minds in the country, resources constrain the care that patients get. But medicine is all about making the most of what you have, and accepting that there’s only so much you can do. 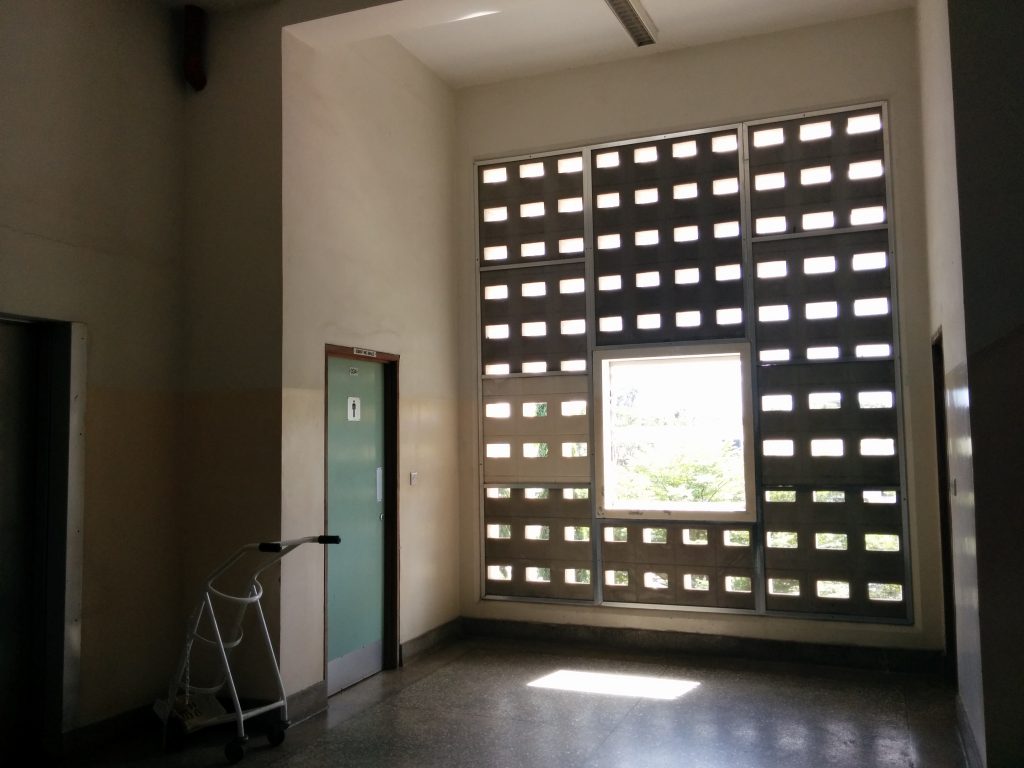