Today we saw a surgery that we’ll likely never see again. A young man in his early 20’s walked in to the ENT operating theater at Muhimbili National Hospital with a large tumor on his forehead that enveloped his left eye. If you look closely at the X-ray in the top left corner, the extent of the tumor is quite clear. 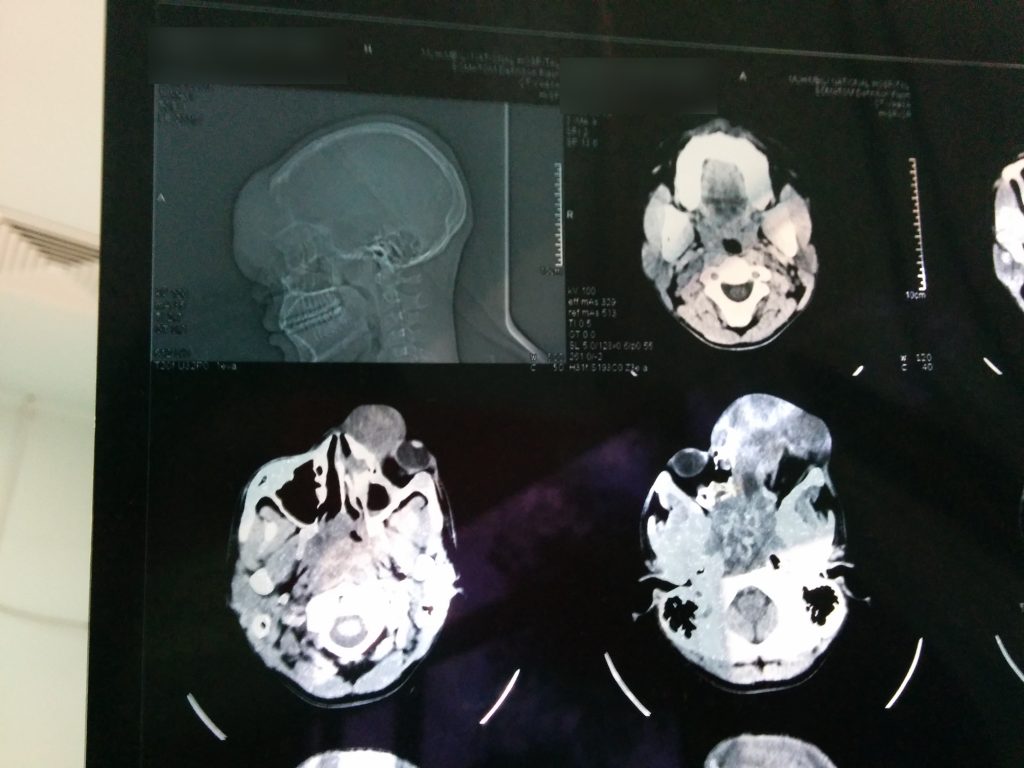 X-ray and CT scans showing the extent of the tumor

Judging by how many surgeons and residents were present for the surgery, this kind of tumor is unusual even in ENT. The head surgeon wasn’t sure whether this tumor was caused by cancer, a fungal infection or tuberculosis. A previous biopsy suggested that it was a fungal infection of the sinus – “fungal rhinosinusitis.” The surgery was listed as a “frontal ethmoidectomy,” or a removal of the frontal ethmoid sinuses which are located behind and to the side of the bridge of the nose. 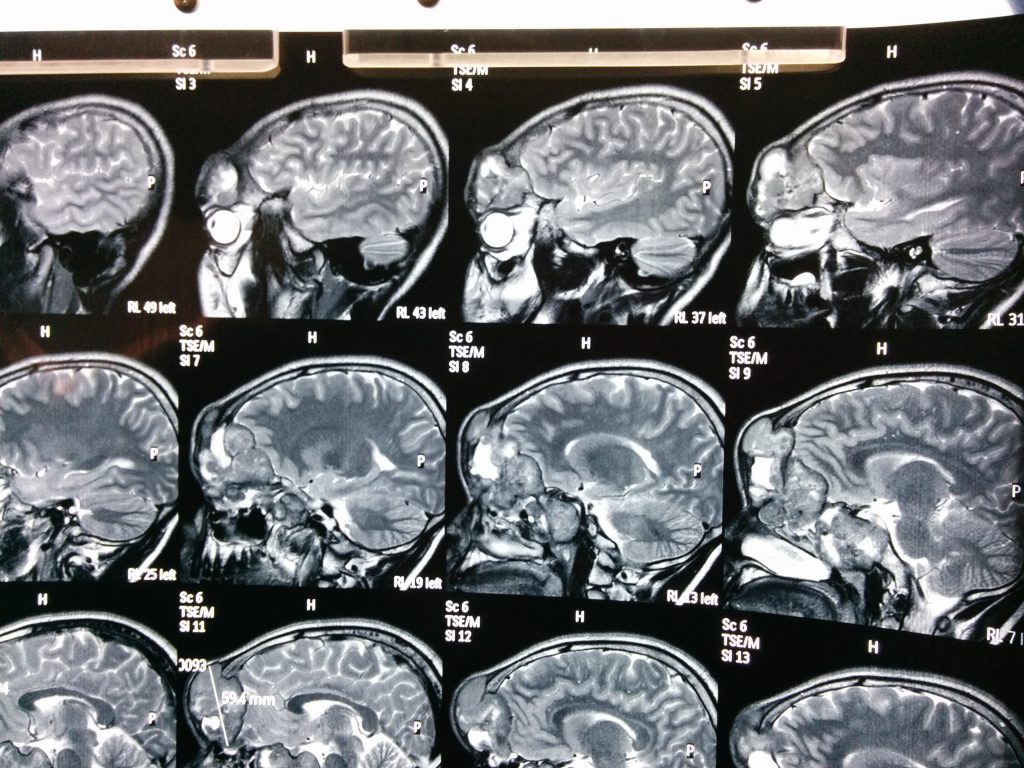 MRI series of the patient’s head. Trace a line from the tumor on the forehead to the brain – it will cross a thin black line which is the dura, indicating that brain tissue is not involved in the tumor

In any case, the surgeon wanted to operate and remove as much of the tumor as possible and send samples to the lab for closer examination. 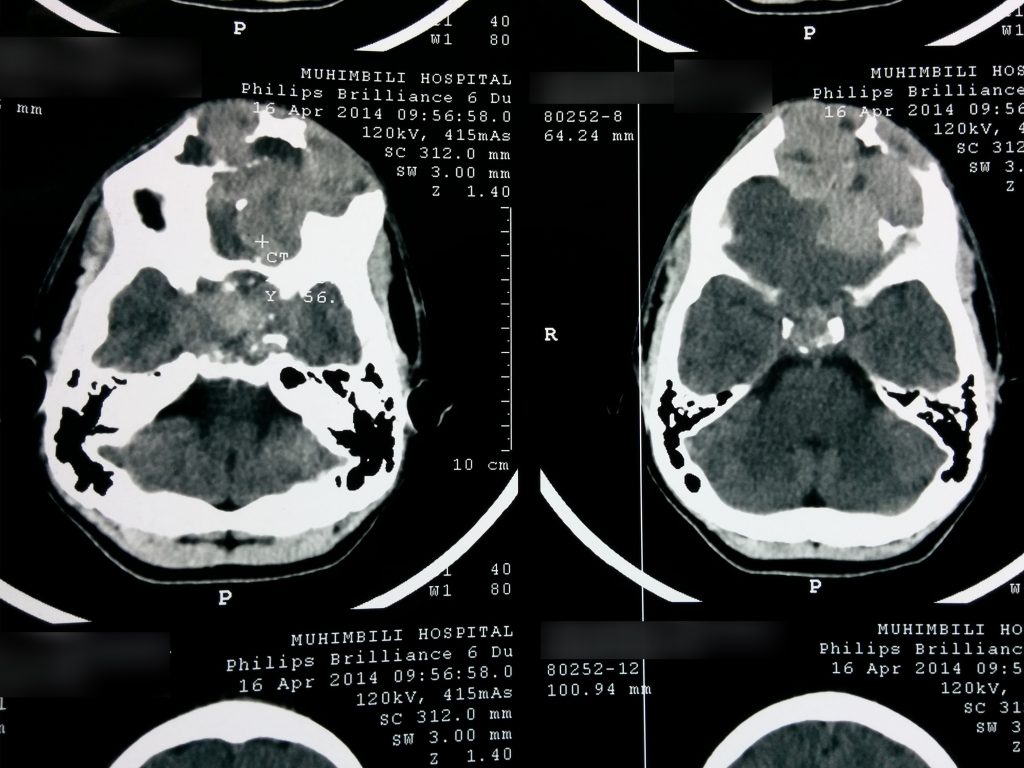 CT scan of the patient’s head. Here you see different slices of the patient’s head, as if he was cut horizontally into pancakes starting from the crown of his head. You can see where the tumor has invaded and destroyed parts of his skull (upper right corner of both images).

Because the tumor had enveloped the patient’s left eye, they had to suture the eye shut for the surgery in order to avoid damaging it. The surgeon made one long horizontal incision through the patient’s forehead and began cutting and scraping away at the tumor inside. 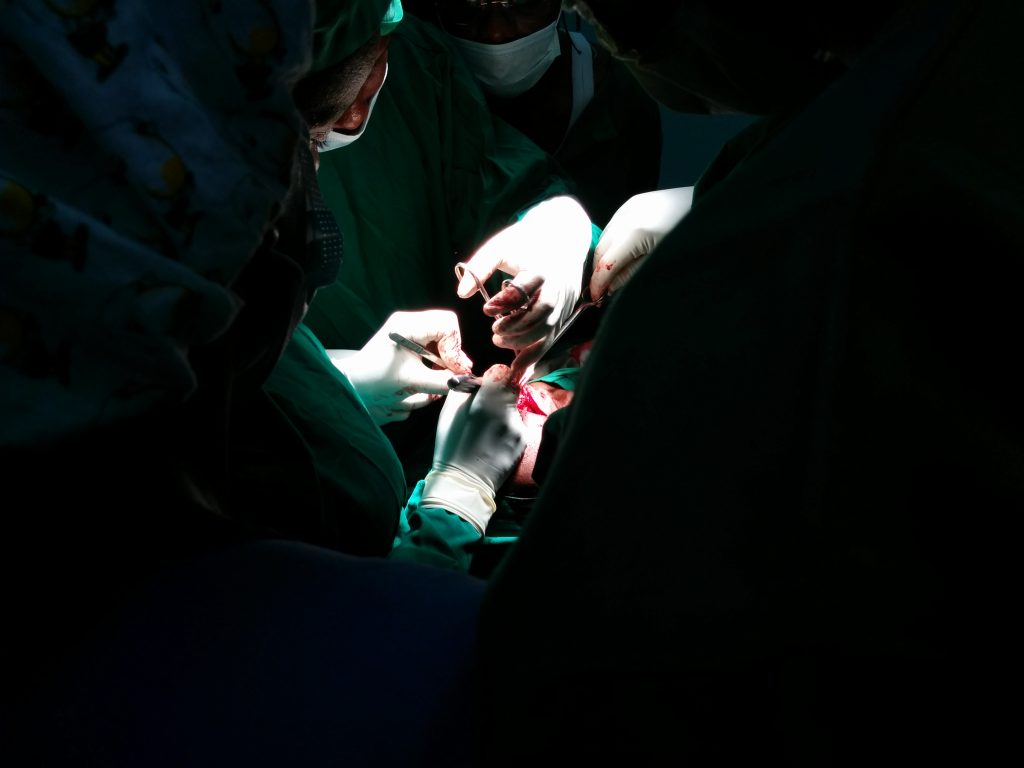 The head surgeon operates on the patient’s forehead through a long horizontal incision.

She spent over an hour removing bits of whitish tissue. At one point she called in another surgeon to consult on whether it was safe to scrape away tumor tissue near the back of the patient’s left eye socket.

The operating room was packed with about 16 people at one point and it was hard to find a spot where I could see what was happening. The surgeon jokingly admonished the anesthesiologist for standing too close and preventing residents from seeing the surgery. 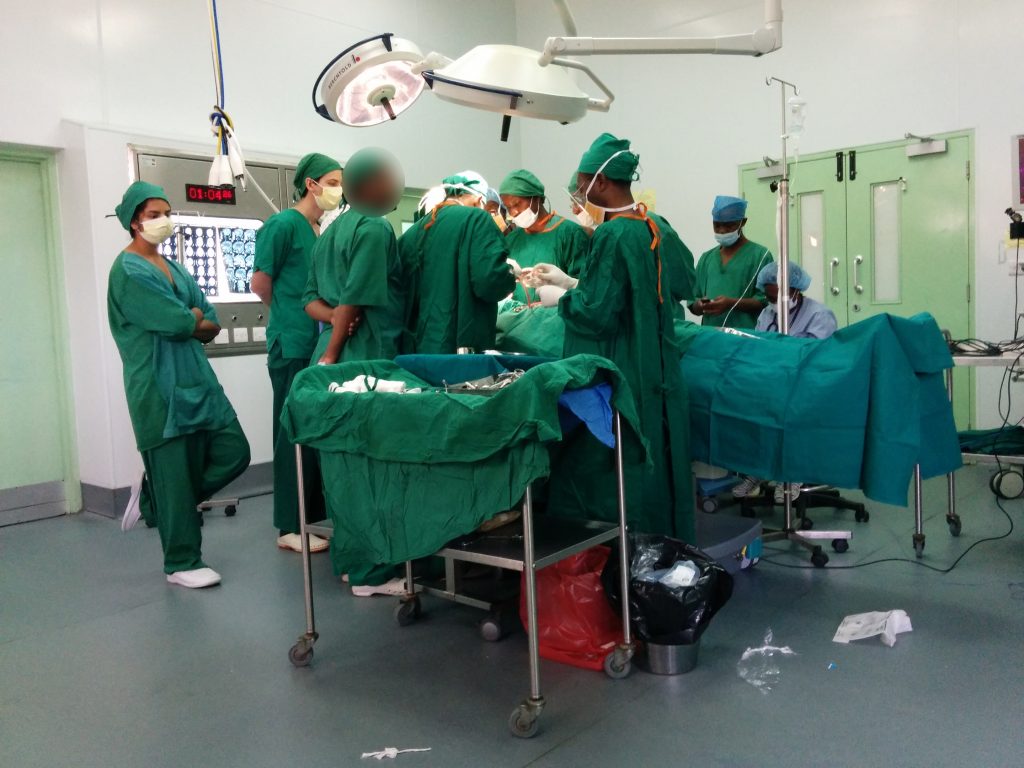 The CT scans and MRI images above are dated from spring of 2014. I don’t understand why it took them so long to operate, or why they’re operating now using two-year-old images as a guide. In the meantime, this patient has had to live with a tumor the size of a tennis ball on his forehead. His eye was bulging out of his head and it was hard for him to blink properly.

When the operation was over, the surgeons suspected that this was actually a cancer tumor rather than a fungal infection. It wasn’t clear exactly what this man’s prognosis was, not at least until the pathology lab examined the samples of his tumor. But he’s at least temporarily relieved of the massive tumor that once occupied his forehead and sinuses.

Based on the day’s schedule, I inferred that about half of ENT surgeries consist of removing the tonsils of young children. The case preceding the tumor was an adenotonsillectomy (removal of both the tonsils and the adenoids), as was the case afterwards. We were asked to stay further away from the surgical field when young kids were being operated on because of the higher risk of infections.

I only wish they would have used a camera and turned on the TV screen so we could see the surgeries up close. At least the room was air conditioned – you don’t want surgeons sweating and dripping into the surgical field 😉