When you go the hospital, you expect them to have basic supplies like gauze, surgical masks and antibiotics. Supplies like these are cheap and readily available in Western countries, but in government hospitals in Tanzania, they’re coveted treasure. 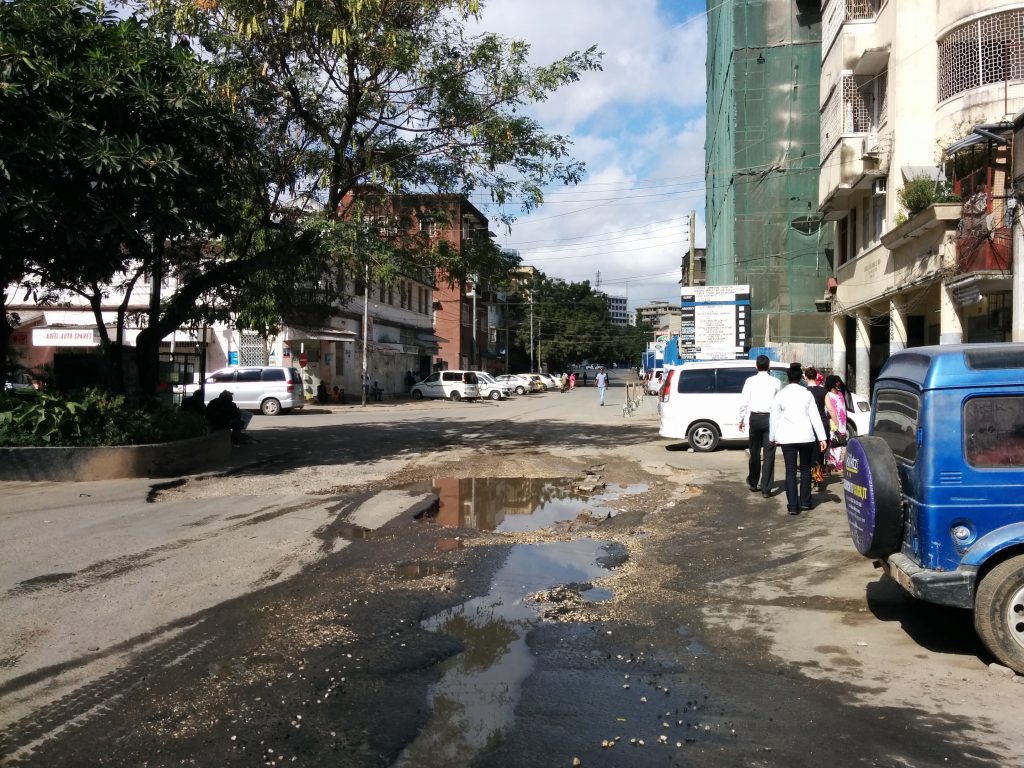 Walking to the Mnazi Moja Hospital on the second day of Eid, a public holiday in Tanzania

We noticed the last few days that the minor procedures theater was running low on basic supplies like gowns and gloves. It was heartbreaking yesterday to send away a child with an infected animal bite and whose mother didn’t bring antibiotic ointment to the hospital, which had none to provide. As most patients brought their own supplies in a brown paper bag from the pharmacy, we set out on a mission to resupply the minor procedures theater on our own. 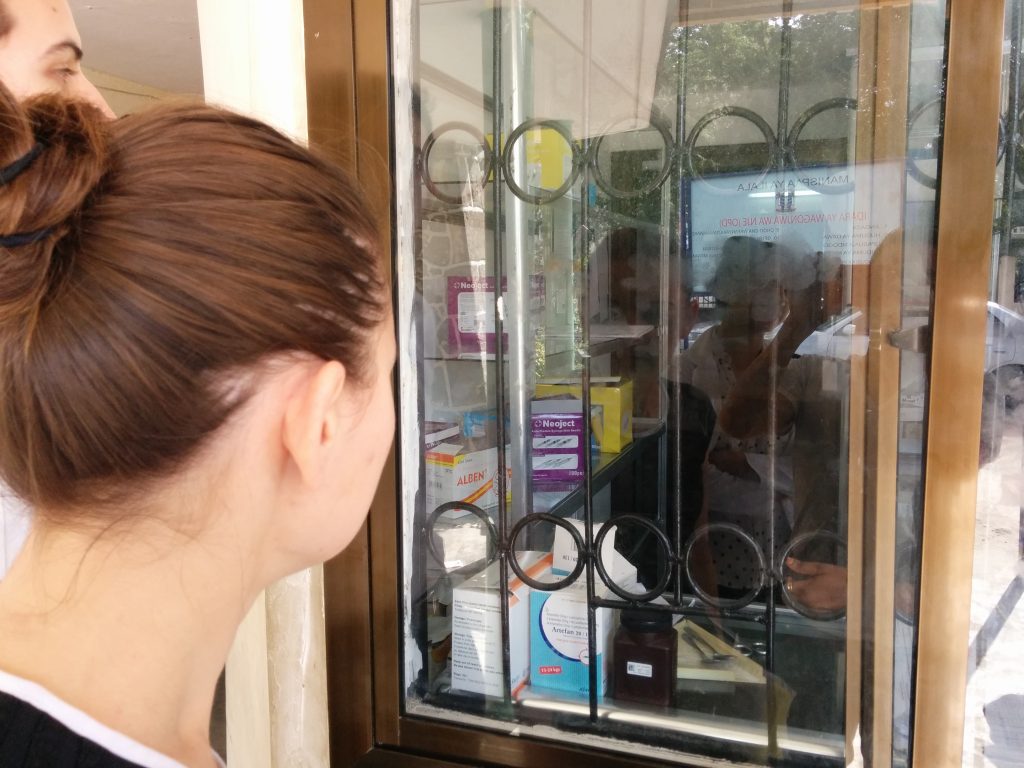 Trying to buy supplies from the Mnazi Moja Hospital Pharmacy

First, we went over to the hospital pharmacy and offered to buy syringes, surgical blades and gauze in bulk. Not so fast, we were told – you need a prescription for those things. Fine.

We went back to the doctor in the minor procedures theater and, when he finally understood what we planned to do, happily wrote us a prescription for everything from gauze to bandages to metronidazole gel.

We triumphantly brought our prescription to the front desk, ready to pay and obtain a receipt so we could pick up our items, but we were told the first step was to visit the pharmacy to get everything priced out and make sure things were in stock. 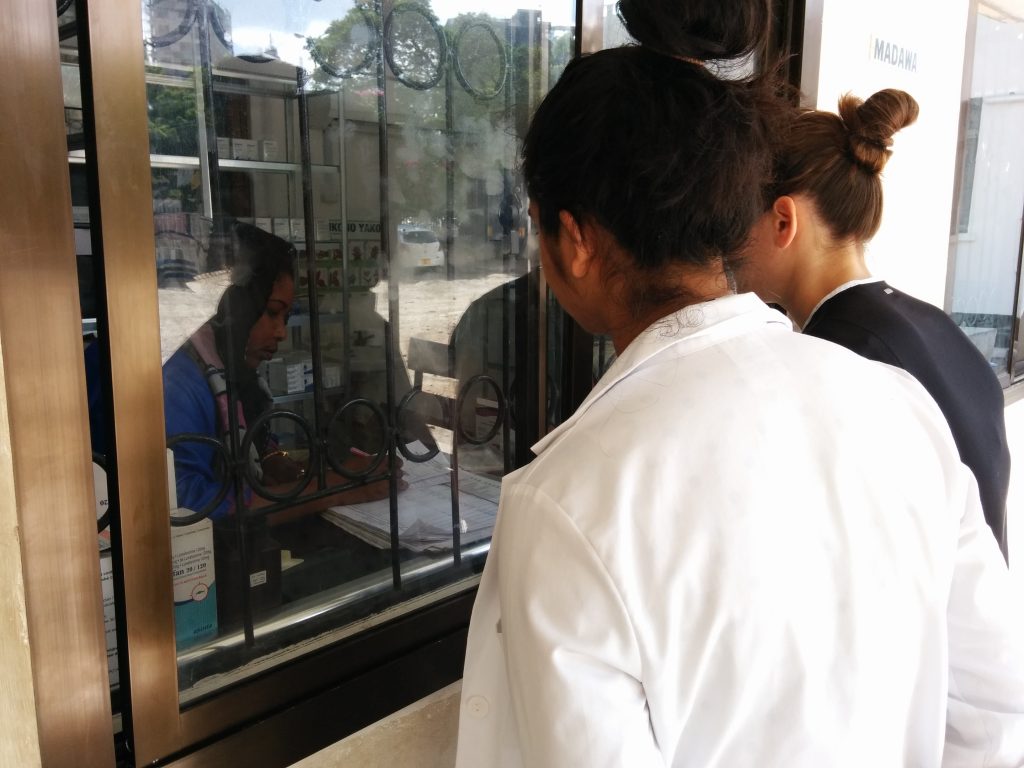 Pricing out our prescription at the Mnazi Moja Hospital Pharmacy

We returned to the pharmacy and waited in line, only to discover that the hospital pharmacy doesn’t stock gauze, bandages, surgical blades or antibiotic gel but they could provide us with antibiotic ablets. I’d seen a nurse crush metronidazole pills and sprinkle them onto a wound, and since we were in a pinch, we told the pharmacy to feel free to change our “prescription” from gel to pills.

Then, we returned to the front desk to pay for our revised prescription. I felt so guilty on my first day for ruining two syringes by causing them to lock. A man suffered significant pain while getting stitched because we ran out of syringes to give him lidocaine with. We found out that syringes cost about US$0.10 each. 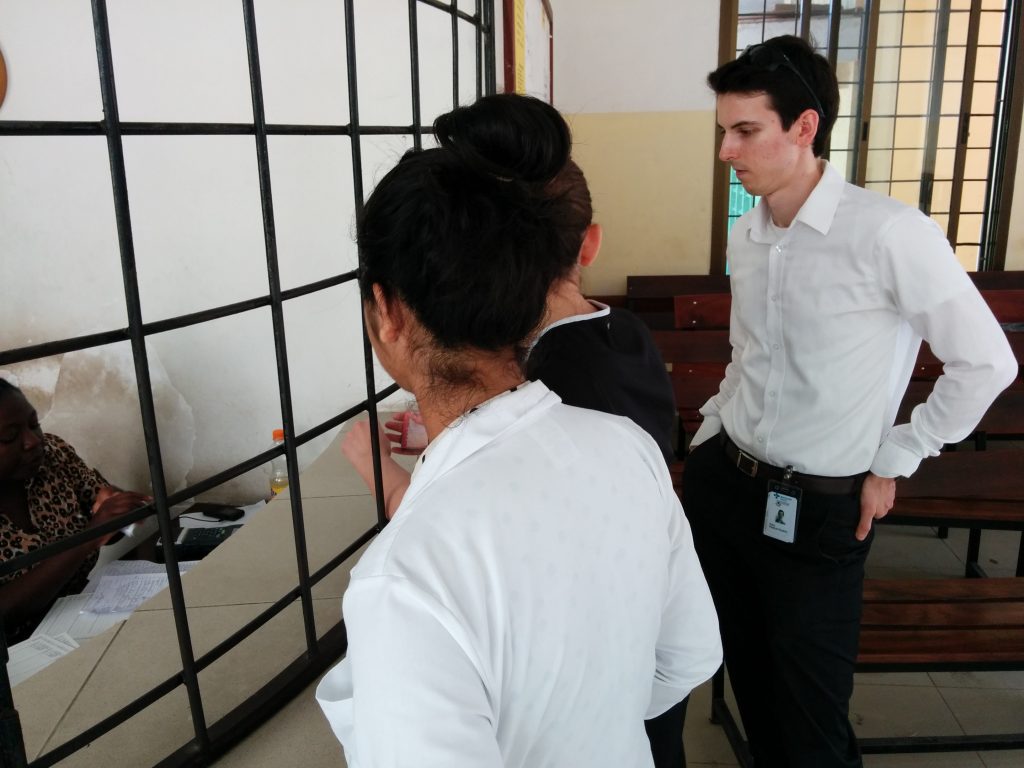 Paying for our prescription at the hospital front desk

Finally, we picked up our supplies and returned to the minor procedures theater, where we were invited to dump them onto one of the procedure tables for the staff to process. 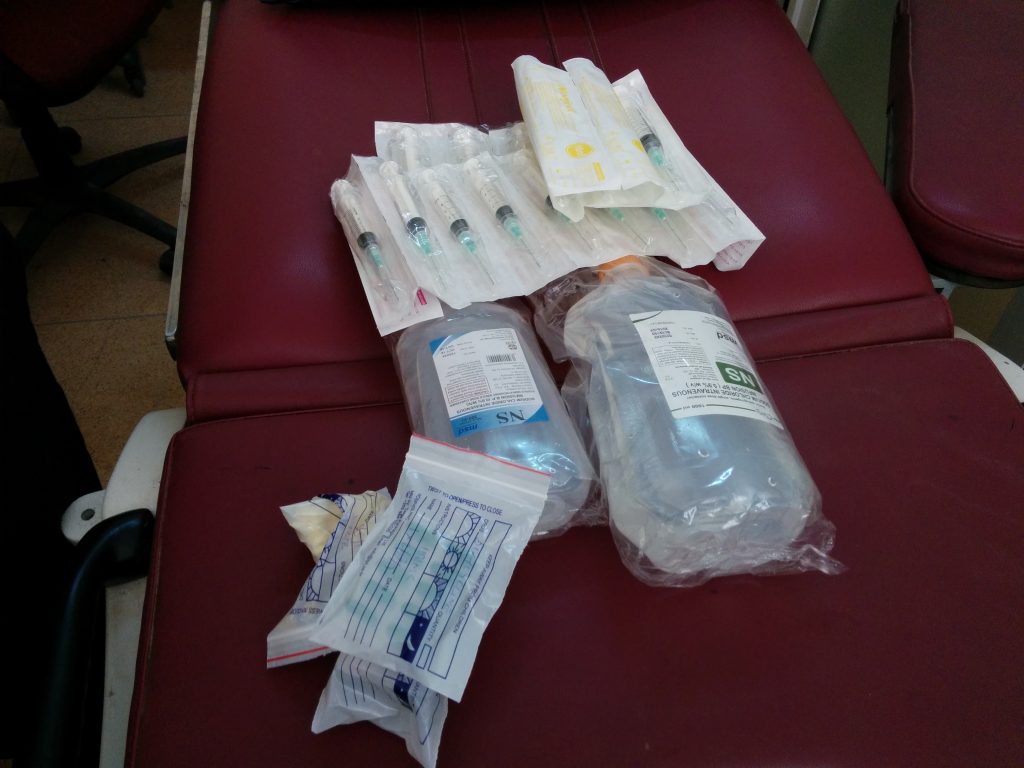 The whole thing was a bit of an ordeal, and if I was a patient with an infected foot abscess, I’d be spending a good part of my day just chasing down supplies and medications, probably straining my feet so much they wouldn’t heal.

We wanted to see a vaginal delivery today, as it was the one major procedure at the Mnazi Moja Hospital we hadn’t seen. The prenatal ward had 10 beds and all were full. We introduced ourselves to the head nurse, who didn’t seem thrilled that we were there. After testing our Swahili skills and finding them to be unsatisfactory, she moved on to question why were there in the first place.

“Are you a doctor or a nurse?” she asked me.

“Training to be a doctor.”

“So how many years you study?”

“We’re in our second year… three years of school total, then a residency.”

“How many babies have you delivered?”

“None!? What do you do in medical school?”

“We’ve been learning mostly in the classroom.”

“So.. you learn in the classroom in Canada, then you come to Tanzania to learn how to do things?”

“Have you ever seen a baby delivered?”

At this point, the nurse shook her head, as if we were simply dumped on her lap with the expectation that she teach us everything she knew about labor and delivery in a few hours. 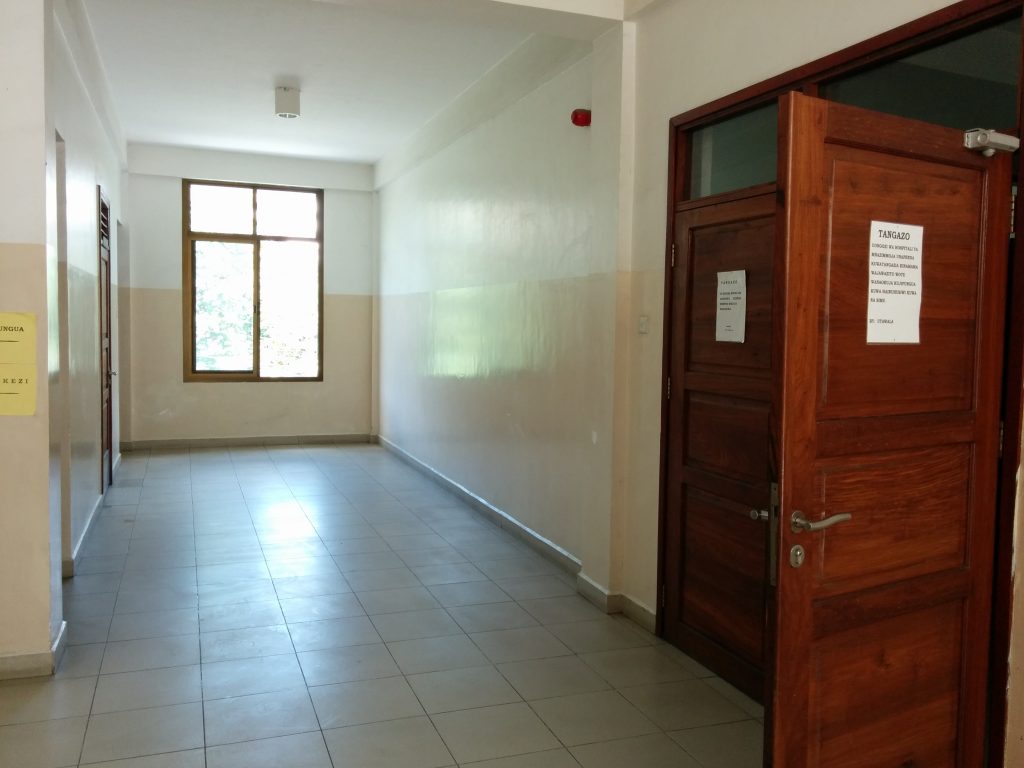 We learned that there were two women in the prenatal ward who were having contractions, one was 2 cm dilated, the other 8 cm.

We retreated to the staircase outside of the prenatal ward and waited… and waited. Nothing was happening. I don’t know whether did it for our benefit, but the nurses gave the woman who was dilated 8 cm a dose of oxytocin to induce labor. If that failed, they’d send her for a C-section. 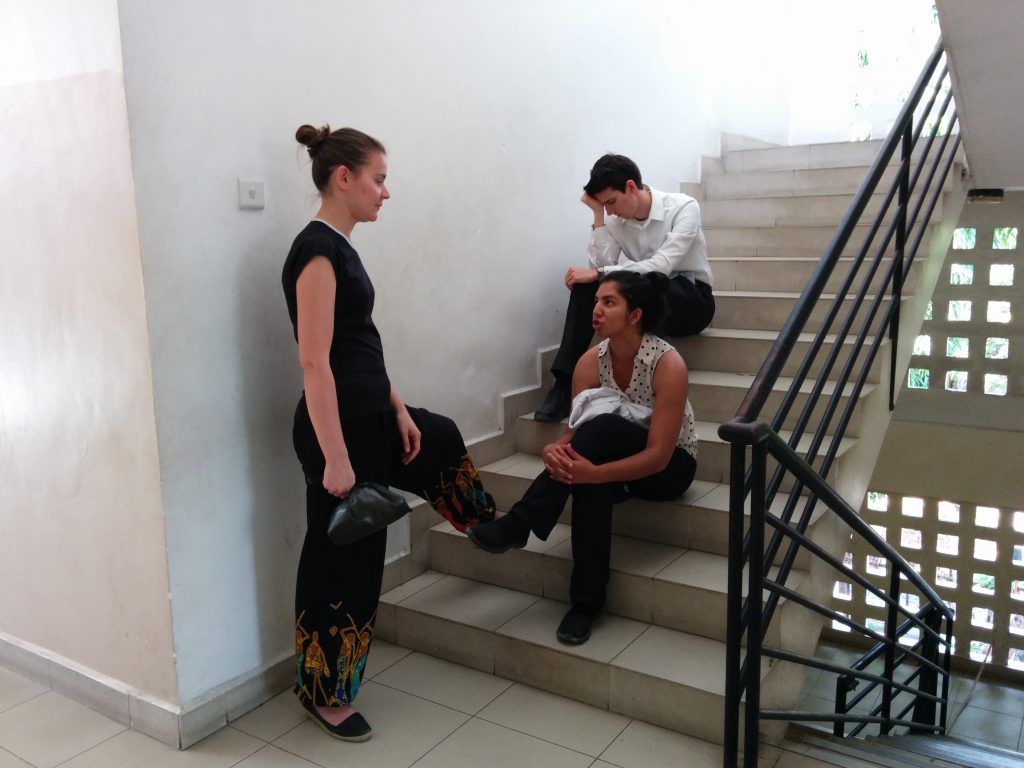 This was a perfect time for lunch at one of Dar Es Salaam’s countless Indian eateries.

When we returned to the hospital we found out that the woman who’d been given oxytocin had already given birth – but by C-section. Apparently the oxytocin hadn’t worked, and they wanted to get this birth done and over with.

As it was a public holiday (the second day of Eid), and an otherwise slow day in the hospital, we set out on a mission to find antibiotic gel at other pharmacies. It didn’t take long to find metronidazole gel on sale behind a pharmacy counter without a prescription.

It’s disconcerting to see antibiotics as easy to buy as candy in Tanzania when we’re taught to prescribe them with such care in Canada. It’s no wonder that antibiotic resistance is reaching frightening levels in the third world. Perhaps many of the wounds we’d seen in the minor procedures theater weren’t healing precisely because of improper use of antibiotics, causing resistance.

Today was our last day at the Mnazi Moja Hospital. We’re still staying in Dar Es Salaam so we’ll have a chance to deliver the antibiotic gel and other supplies to the minor procedures theater for patients who don’t bring their own. I just hope that the child with the animal bite on his foot gets some of it. 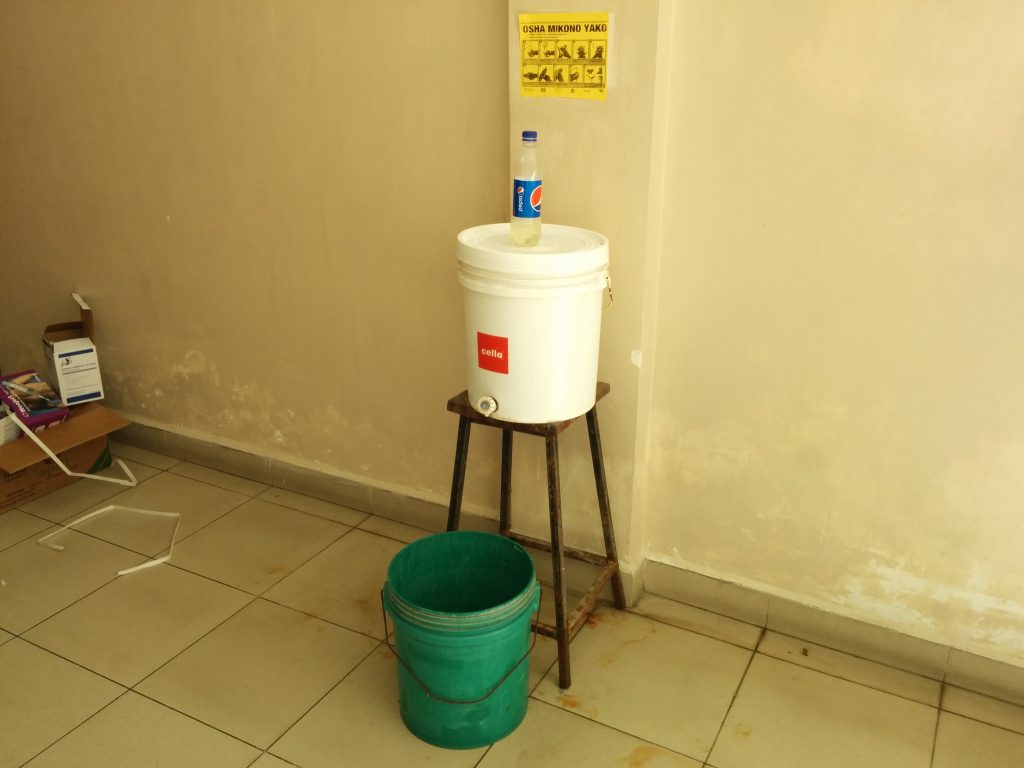 A “Handwashing Station” at the Mnazi Moja Hospital. Soap is in the Pepsi bottle.

Although I enjoyed my time at the Mnazi Moja Hospital, it was frustrating to feel so limited in what we could do for the patients. The hospital had many shortcomings in the consistency of sterile technique and infection control. Painkillers and syringes are to come by and we witnessed several people in excruciating pain while getting stitched, when they shouldn’t be feeling anything.

Many patients can’t afford their treatments, and even just getting antibiotics and supplies can be a cumbersome process. Then again, practicing medicine is often about making the most with the limited resources you have. 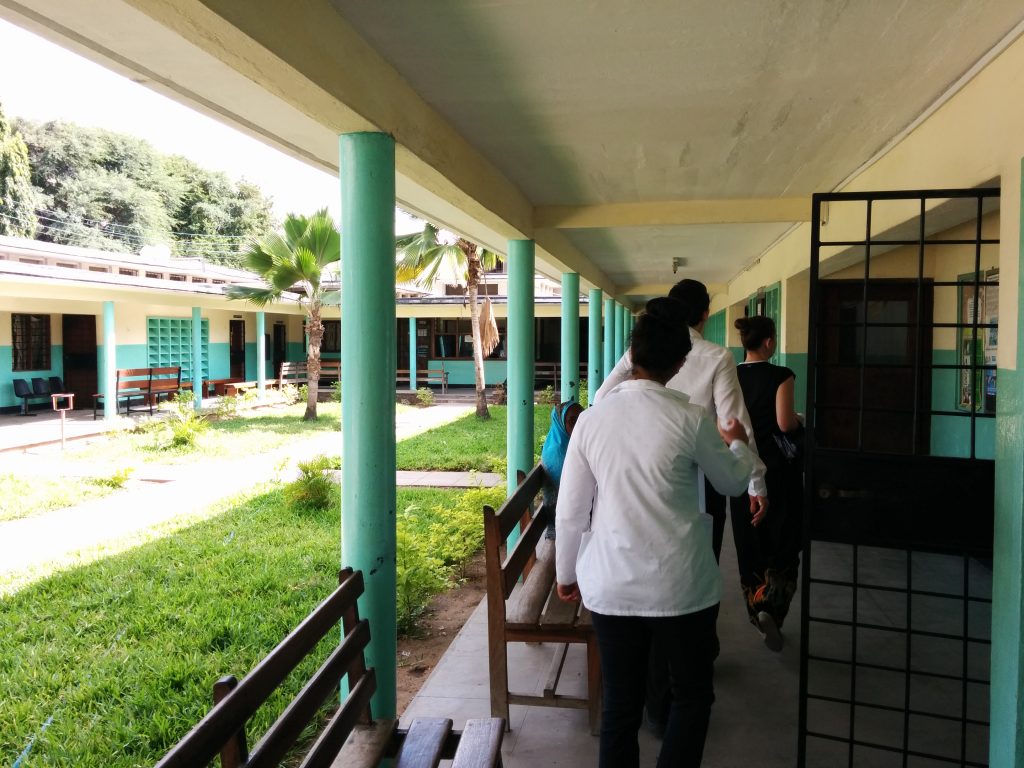