Yesterday I wrote about Martha, an HIV-positive woman with advanced stage PCP pneumonia. This morning I returned to the medicine ward to try and find her.

“What happened to Martha, the woman with PCP?” I asked an internist I was rounding with yesterday.

“You mean the fat one?” the internist extended his hands outward.

“She collapsed and died in the evening.”

The doctors at the Amana Regional Hospital often seem lacking in sympathy – some of it may be due to cultural differences and perceptions of suffering and death, and some I suspect as a defense mechanism against the frustration that comes with working in a system with such limited resources. Every day, lives could be saved with simple but (relatively) expensive interventions, such as intravenous Septra (an antibiotic) in Martha’s case.

We spent today at the orthopedic outpatient department where we saw a steady stream of patients with fractured bones, sprained joints and strained muscles. 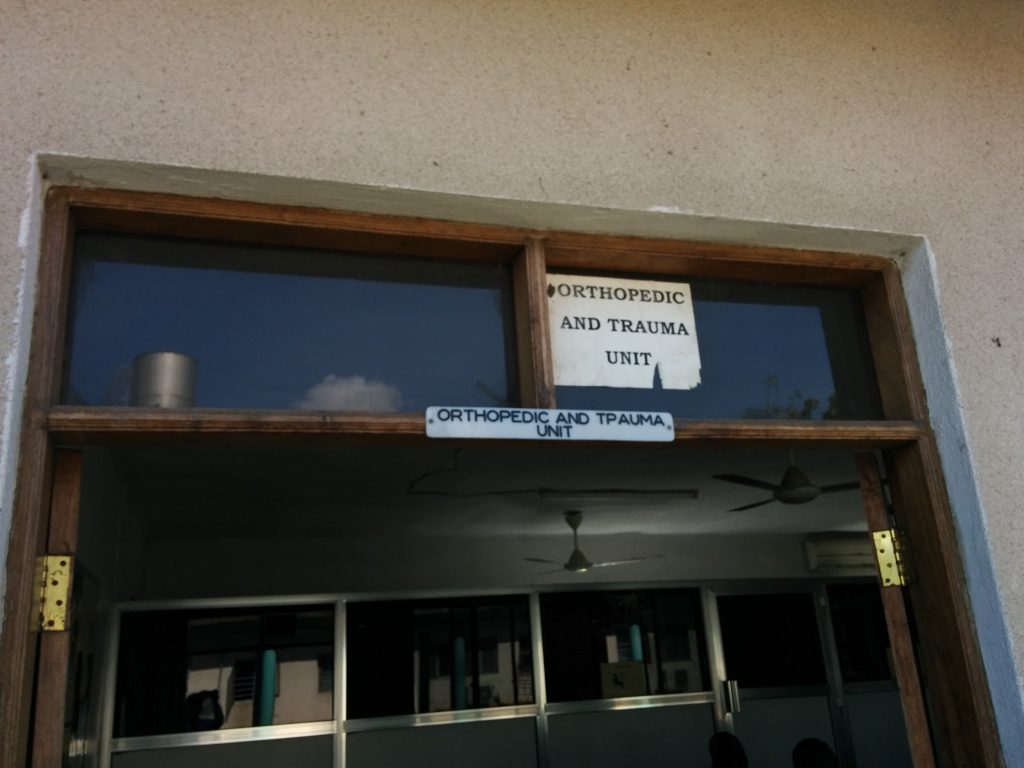 As in other departments, patients’ lack of funds can seriously compromise their care. We were taught in medical school that dislocated shoulders require two X-rays: one from the front, the other from the side, to determine whether the humerus (upper arm) bone is dislocated to the front, or the back. 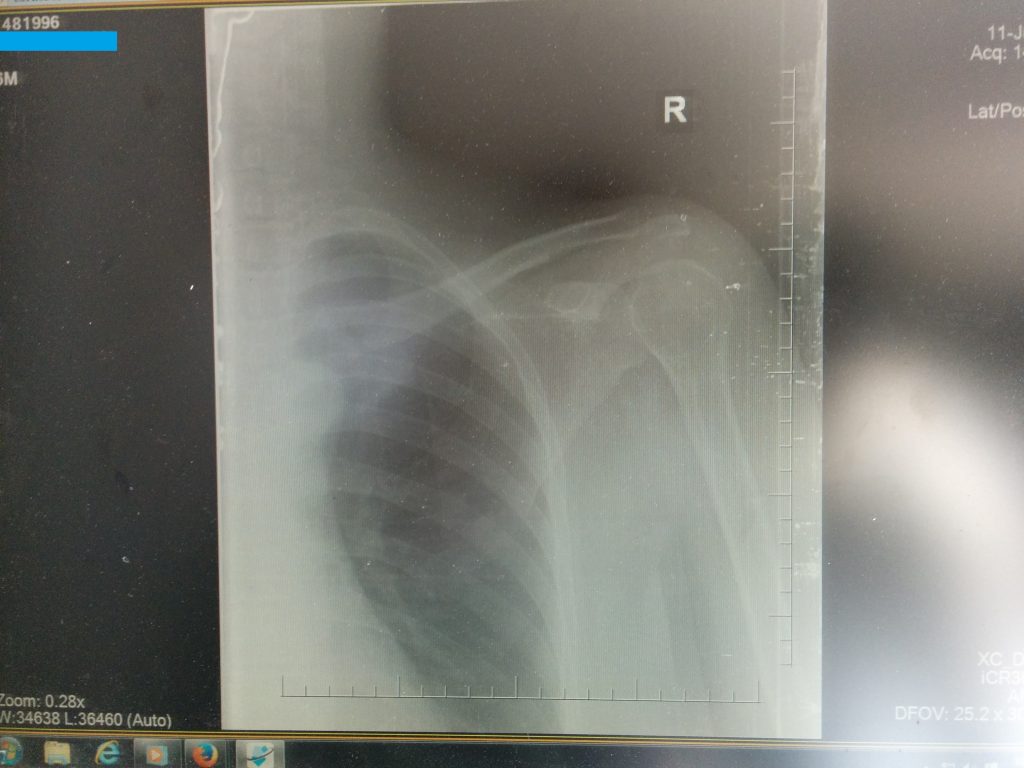 Our first patient had a dislocated shoulder, but with only one X-ray from the front, which was all she could afford, it wasn’t clear exactly how her humerus was positioned. The orthopedic surgeon thought the shoulder was dislocated anteriorally (to the front), although an intern said that it was posterior. The patient was moaning in pain, and was sedated with Valium.

For the first time in my life, I saw a dislocated shoulder being “reduced” (put back in place). The orthopedic surgeon, going on his working diagnosis of an anterior dislocation, got ready to reduce the shoulder using the Hippocratic Technique. 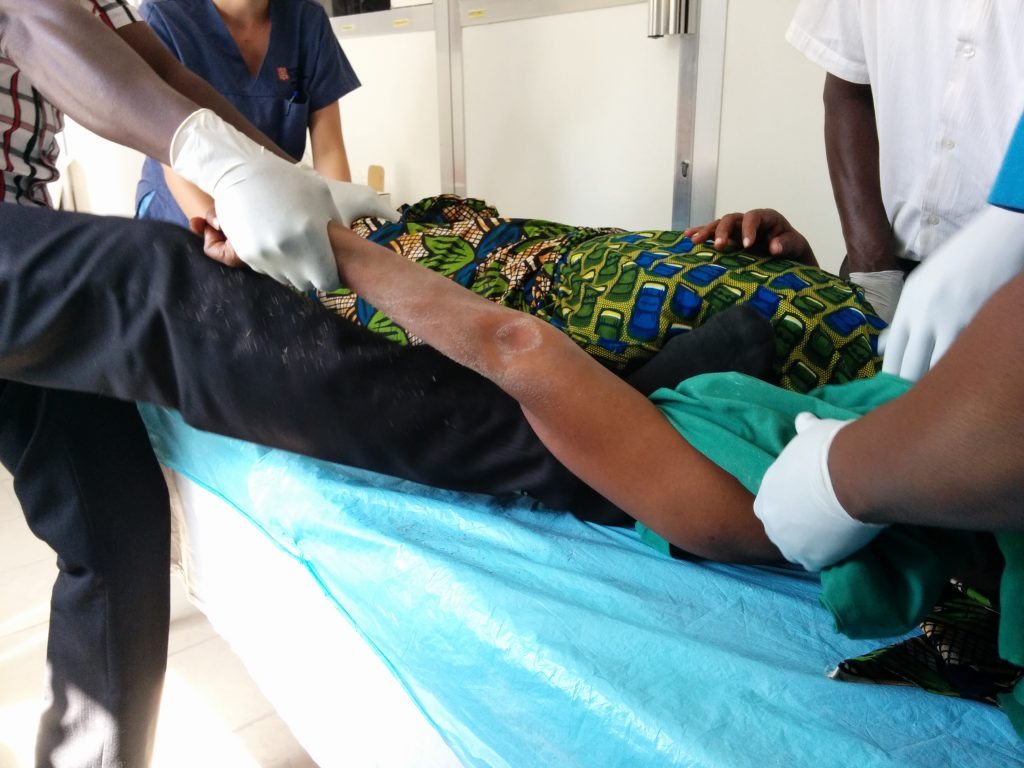 The surgeon removed his shoe, stuck his foot into the patient’s armpit while she laid on her back, and pulled on her arm while twisting it. What came next was a shriek so shrill I could almost feel my skull vibrate – the Valium didn’t seem to help. It took several attempts before the surgeon was convinced that the patient’s shoulder was back in place, at which point her arm was placed in a sling for her shoulder joint to heal.

We spent the rest of the day seeing orthopedic patients with one of the resident doctors, who was training to become a general practitioner. In Tanzania, medical school is five years, with direct entry from high school. After that, doctors do a one year internship to become a GP.

Dane and I had the chance to do several physical exams of joints that we’d learned about in school but rarely practiced, including the shoulder, foot and wrist. After doing the exam, the resident showed us the X-ray, then asked for a diagnosis and treatment plan.

It was validating to work in orthopedics and get the same diagnosis as the resident – orthopedics was my worst course in my first year of medical school as I hated memorizing anatomy and various tidbits of seemingly disjointed information. But now it was starting to make sense in practice.

In some cases, usually with children, the patients might have only had a strained muscle, but the doctor would place the joint in a back slab anyways. “Sometimes we treat the parent, not the patient,” he explained. Besides, it would help keep the muscle immobilized.

At times I wondered about the skills and knowledge of our resident. He was working with limited resources and knowledge – by his own admission, he’d forgotten much of the orthopedics he’d learned in medical school, and here he was, on his second week in his orthopedic rotation, making diagnoses from grainy X-rays and prescribing treatments with limited supervision.

The plus side, if it could be thought of that, is that Dane and I were able to take on a much greater role in seeing the patients. On the other hand, it sometimes felt like all three of us were stabbing in the dark.